Wizard of the Mall


At last Auntie Em is allowing Dorothy and her little bunny FuFu to go to the mall alone! But just as Dorothy enters the revolving doors, they spin out of control knocking her unconscious and killing the wicked sales clerk of the East Mall. Luckily, Glinda, a good sales clerk, helps Dorothy on the quest to find Kaufmann's Department store. Along the way Dorothy travels with Burnout, who needs new brain cells; Security Guard, who needs a heart; and the Nerd who needs some courage. A modern twist on an all-time favorite story. About 30 minutes.


The Hero Squad of Metro Valley, Iowa—a team comprised of superheroes 3-D, Lindy, Iron Lung, and Slapshot—are enjoying a bit of a peace in their home city. All that changes when their archnemesis, the ever-scheming Nikolai Oshgoshbgoshnikov, gets a visit from his teenage niece Veronica. Veronica is a supervillain-in-training with a knack for robotic henchmen and a devious plan to destroy the Hero Squad from the inside out. Posing as a super-fan, Veronica infiltrates the Hero Squad’s HQ and begins to plant seeds of dissension among the four friends. Things come... 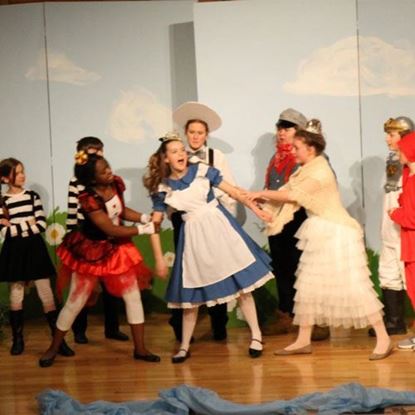 Jo White and the 7 Campers


Take seven inept campers who must win a variety show competition on which the whole camp's reputation is based and what have you got? Instant disaster! Luckily for the campers, Jo White, who would rather sing than whistle while she works, has escaped to their cabin. Hilarity and confusion follow, but the camp's reputation is saved!