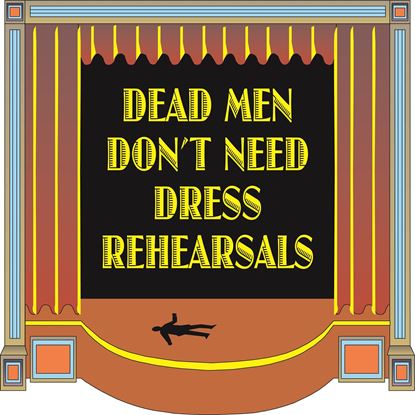 
Everyone seemed to hate Derek Moore, so no one is surprised when the smooth-talking actor is found dead in the middle of a dress rehearsal. Archie Lewis, a well-intentioned but goofy detective who happens to be in the theater, offers to solve the case, but things turn out to be more complicated than he had anticipated. Why does the female stagehand, Ed, talk only in lines from classical literature and popular songs? Why does the laconic Francis keep covering for the unsmiling Jessica? Is there more to naive Terri than devotion to Derek? Do Maria's wisecracks ...


Charles Lansing, a staid and humorless millionaire, has been found murdered at his country estate and Lt. Paris is in charge of the investigation. Alibis are re-enacted by the suspects, including the third wife married to Lansing for less than a year; the brooding stepchildren; the deceased's attorney, a woman opposed to his latest marriage and the changes in his will; Madame Arcadia, who predicted his death; and the handyman and his wife, who wish to leave their jobs. Everyone had motive and opportunity. At the end of Act I, Lt. Paris leads the audience in a...

Lost in the Bermuda Triangle


Welcome aboard the "Oh, Suzanna" and set sail to beautiful Antigua...if you dare! Join Captain Krunch and his lovely daughter Leisel in this wacky sea adventure where you, the audience, are also the passengers. Problems start when the "Oh, Suzanna" gets trapped in the Bermuda Triangle and attacked by a crew of lost seventeenth-century pirates. Lockjaw Lenny and his motley crew of buccaneers plan to take over Captain Krunch's vessel, but things begin to go awry when Leisel and Lockjaw fall in love, their furtive meetings not unnoticed by Lockjaw's buccaneers. ...


Become the celebrated guests of Lord and Lady Moon at the coveted annual Moonlight Masquerade Charity Gala. When a diamond Tiffany necklace scheduled to be auctioned off at the event mysteriously disappears, it becomes clear that someone present isn't quite what or who they appear to be. But things take a decidedly sinister turn as members of the entourage turn up quite indubitably, irrevocably dead. Could one of the remaining blue-bloods be responsible? Could someone in the audience help solve these heinous crimes? Can the crimes even be solved, or will the ...


Texas was never this fun - or this deadly! Jonas Carmody, President and Founder of Carmody Oil, is dead of natural causes at the age of 78, leaving an estate valued in excess of $30 million. The heirs apparent are in for a big surprise when they gather together with his friends and business associates for a memorial dinner in his honor. Unbeknownst to his eccentric family, a surprise reading of the will is on the menu, and murder is certain to be a la mode! As the story unfolds and the family unravels, it seems everybody wants more than their fair share. But ...


The premise is simple: A group of students dig up a corpse as a prank but the dead get upset and rise from the grave, trapping the students inside the mausoleum. Which character has the power to stop the Zombie menace? The audience gets the opportunity to band together in groups to solve the mystery. This part of the play is called the Clue Quest and happens during the intermission. Clue Characters (Zombies) are scattered around the building at strategic locations to give clues the audience groups. All the clues lead to the identity of the character with the ...