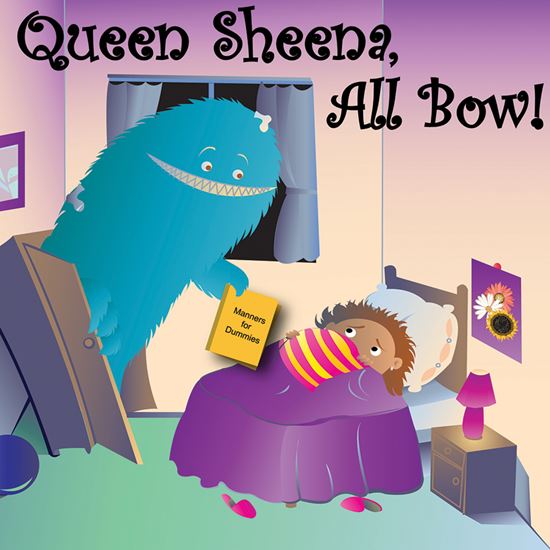 Help! please. How do you teach civility when Miss Manners and Mary Poppins aren’t around? For three professional bedroom monsters, the assignment to change young Sheena is business as usual – almost. This case has a lot riding on it. If not successful, Fredrick will be forced to retire, nervous Igor will fail, and Petra will be partnered with a monster she dislikes. Never before has the future of this hairy team rested in the palm of a little, spoiled, rude girl – and all under the inquiring eye and note-taking hand of another monster, a snooping New Orc Times reporter! Will showing Sheena her future, grownup self, all mean and demanding, help her change? Looks like “queen” Sheena holds all the power…uh oh.

HER PLAY “QUEEN SHEENA, ALL BOW!”

A: “Sheena” came to be written through the following series of actual events: Once upon a time, in a nearby land of wonder, a competition was held. The rules, simple enough, meant hand-to-hand combat with pirates, interrogations lead by medieval meanies, corralling scary mer-people, and jousting vampire bunnies. Almost perishing at the hands of a crazy romance novelist, I crawled forward to accept the position of playwright. I love serendipity!

A: I would have loved to play Aneehs – so exceptionally demanding, and pompous. Consequently, the entire exchange between “Queen” Sheena and “Super-Queen” Aneehs was one of the most fun parts to write. In particular when Sheena is helping Aneehs to the bed, because one of my favorite words in the show appears. “Legs!” wasn’t in the original script. It was a rehearsal treasure that just had to be made permanent.

A: The characters came from everywhere. Names usually create their own personalities in my head; from there starts the list of possibilities. In other words, I sprawled on my bed and poured through my trusty, sticky-note sprouting book of baby names. Next, I flipped through my dog-eared book of notes, just in case a scribbled midnight brainwave offered up an interesting turn of events. Little bits of conversation also provided plenty of inspiration, for example Sheena’s “icky, and nasty ” whining came from my youngest brother joking with my sister – siblings do come in handy! And as for whether they were based on anyone in particular, I’ll plead the Fifth, and say only that we all know a real Sheena, or JJ.

A: I tried to create something that: I was proud of; could act as a good introduction to theatre; motivated youth could feasibly put on themselves; and that would maybe, possibly, with a little assistance, help kids realize that being polite is not just something for old people.