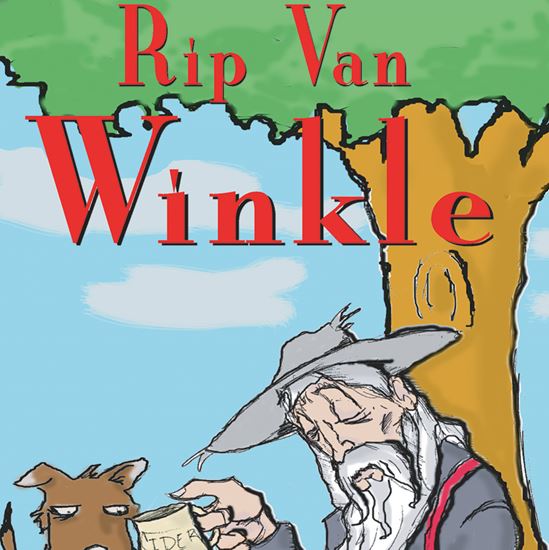 Adapted from Washington Irving's short story. No one will be caught napping as Washington Irving's supernatural tale comes to vibrant life in this action-packed comedy that combines faithfulness to the original text with slapstick humor, hilarious dialogue and fascinating characters. Young Rip Van Winkle escapes from an overly-critical wife, bowls with the ghostly Henry Hudson in the Catskill Mountains, then mysteriously awakens 20 years later to find life in his colonial village vastly changed. With minimal set requirements and maximum involvement by an extremely flexible onstage ensemble, this "storyteller's theatre" one-act comedy is ideal either by itself or as part of a full evening of fun, spooky entertainment. It's also perfect for touring or contests. Early American literature has never been so much fun! About 45 minutes.

Q: What inspired you to write this adaptation?

A: I can relate to the story of Rip Van Winkle, a storyteller and friend to young and old alike who is falsely accused of being lazy. I've always enjoyed taking naps, especially when I'm feeling stressed or put upon. It's my way of "checking out," and usually I wake up with a fresh perspective. Sometimes the problems have taken care of themselves without me! Writing this adaptation was like taking a vacation, because I understand and appreciate the title character. He wasn't cut out to be a farmer, and I'm not a corporation kind of guy. So in some ways I wrote the play for myself first, and then for the audiences. I'm so glad my English teacher forced me to read Washington Irving's story in middle school, because 37 years later I can still appreciate it and give it a new voice.

A: I enjoy the broad, physical humor of the show: rubber chicken drops from the sky, people become bowling balls and pins, Rip gets bonked on the head by a cider barrel and chased through the audience by a "dog." But my favorite sequence is when the spirit of Henry Hudson explains to Rip how he sticks with his mutinous and murderous crew, patiently sojourning with them until they are fit for heaven. In literary terms, Hudson is a "Christ figure," and I'm moved by his sacrificial grace. It's a more redemptive scene than in Irving's original.

A: Since I wanted to stay as close to the original text as possible, rough-outlining the play was fairly easy, and even some of the dialogue is word-for-word from the short story. However, I struggled with creating the "concept" or situation that would allow me to use broad, theatrical staging, narration and an extremely flexible ensemble where everyone had lots to do. I didn't want this to be a "realistic" play. When I went back to the text, Irving's prologue about Diedrich Knickerbocker, a collector of stories, gave me my "way in." In my first outline, the villagers acted out the story of Rip Van Winkle as if it was a kind of local festival, and that seemed a little lame. But after sleeping on it for awhile, it occurred to me that it would be so much more fun if the villagers themselves were ghosts, and that Knickerbocker wouldn't realize it until the story was over. Once this inspiration came, writing the play was a breeze. I've seldom written so quickly. It was as if I had become Knickerbocker, and the play was being performed for me in my head while I jotted it down.

A: Even though the audiences will most likely be young, and I want them to laugh and enjoy the play in a carefree way, I also want to plant a seed in their minds about finding their place in the world. I don't want them to be like Rip, hating their jobs, suffering in unhappy marriages, escaping to the equivalent of a cider barrel or solitary hobbies, and "waking up" 20 years later to realize their lives have passed them by, that they missed out on seeing their children grow up, that they contributed nothing to the world. What a waste that would be.

Q: Anything else you'd like to say about it?

A: I'd like to encourage groups that perform "Rip Van Winkle" to make it their own. Have fun with it. Be creative. Feel free to explore the characters, especially the "villagers," who are wide open to interpretation. There are a lot of great moments packed into this short script. Make the most of them. Finally, I'm so convinced that this "storyteller's theatre" approach to classic literature has great potential to educate and entertain at the same time, that I plan to write many more plays like "Rip Van Winkle." But first, I think I'll take a little snooze...