Julian Felice is a drama teacher and playwright from the British Overseas Territory of Gibraltar. He gained a Masters degree in Drama at the University of Kent and trained as a drama teacher at Royal Central School of Speech and Drama before returning to Gibraltar in 2008. He has four plays published by Eldridge Plays and has had two other plays performed professionally in London. He has won Best Original Play at the Gibraltar Drama Festival on five occasions and has given talks on his plays at British universities. Last year, Julian received a For Excellence token from the Governor of Gibraltar in recognition of his achievements in playwriting. Julian lives in Gibraltar with his wife Sylvana and his children William and Natalie. 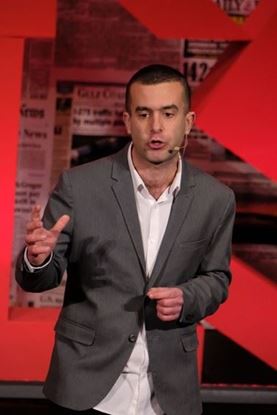 
Challenger: To Touch the Face of God tells the powerful story of the Challenger disaster of 1986. It dramatizes the stories of the seven individuals who tragically lost their lives in this event, while also drawing attention to the controversial circumstances which led to one of NASA’s blackest days. Although some of the scenes depicted are fictional dramatizations, many of the sentences are the actual words used by the astronauts themselves. Scenes and settings flow seamlessly together with only lighting to distinguish them. The result is a hard-hitting and ...


"Mary Jane of Whitechapel" is set during the Autumn of Terror of 1888 when London was haunted by the spectre of a killer which, even now, we know only by the name of Jack the Ripper. Alternating between the investigation into the killings and the life of Mary Jane Kelly, the Ripper’s final victim, the play re-creates the dark atmosphere of a city horrified by blood and violence. Most of the play is based on real people and incidents: the frantic officers on the case, the scores of suspects, the vigilantes who attack foreigners, and ordinary people, scared of ...