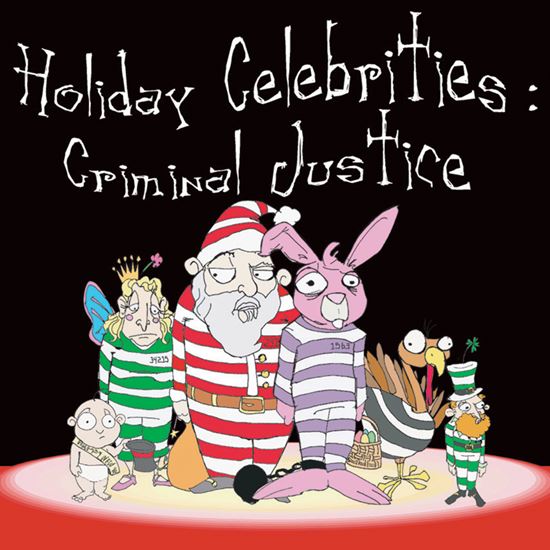 "Attention all units. Be on the look out for a man with pink wings and a bag full of human teeth. He's considered unarmed and hilarious." What if the holiday celebrities that we all know and love lived among us? Would they still be welcomed with open arms or would their actions be considered criminal? In "Holiday Celebrities: Criminal Justice" we enter the dark underbelly of the holiday celebrity world -- a world where Santa's been dodging his taxes, the Easter Bunny gets caught breaking and entering, and the Thanksgiving Turkey is wanted for grand theft auto after stealing a poultry truck and driving straight for the border. The police will be working overtime as they deport leprechauns, arrest Cupid for assault with a deadly weapon, and shoot down witches flying over restricted areas. Call your lawyer and make bail in time to see this satirical play based on all of your favorite traditions!

A.: While writing the first play, "Expose: Holiday Celebrities Tell All," I realized just how truly bizarre some our holidays are. On each holiday, or in honor of certain fairytale creatures, we give up what we would consider normal behavior and accept some pretty strange and sometimes disgusting traditions (like a magic fairy taking human teeth from under your child's pillow as they are sleeping). Taken out of context, these people would usually be arrested for what they do and the results would be hilarious. After writing the first play, I wasn't ready to give up these characters.

A.: I love the whole Halloween/Jedi scene. It was so easy to write because I know so many people like Kenny. When my students performed the scene for an audience during the writing process, the crowd was laughing at almost every line. It was one scene I never got tired of rehearsing. I also love the idea of an Eagle going to Domesticated Animal Eaters Anonymous. I can just see him kicking it with his sponsor, a Burmese Python or an escaped Cheetah.

A.: The holiday celebrities all make a repeat appearance from "Expose," but the rest are sort of stock characters. The bratty little girl, the good cop/bad cop, etc. The real stars of the show are the holiday celebrities and most of them we have some idea or concept of but we never really think about how they live their everyday lives, so I just tried to imagine what it must be like to make rainbows every day or be married to Mother Earth.

A.: I think it's obvious. I want people to fight for these characters' rights and get them out of prison so I can have another three-day weekend.

A.: If this one does well, I think a trilogy may be in order -- a "Before They Were Stars" sort of play showing where they came from and what they were like as teenagers. Santa didn't always have a white beard, the Thanksgiving turkey was at one time just a little chick, and with a tooth fairy in training, all sorts of things could go wrong there. "No No! You take the tooth from under her pillow, don't try to pull one out of her mouth!"