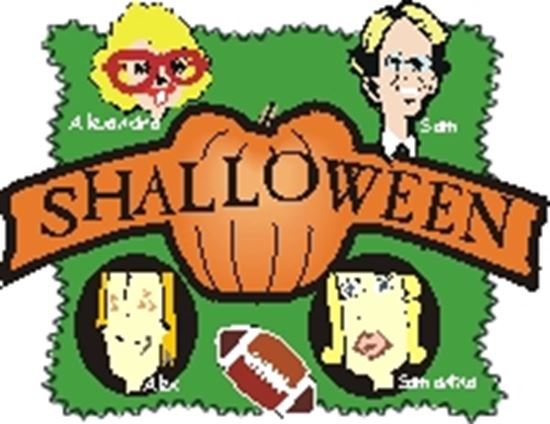 Two unpopular high school students, Sam and Alexandra, find themselves with nothing to do on Halloween, until they're suddenly called to come to a costume party given by the most popular kids. Since they have been invited at the last minute, our unlikely heroes must improvise their costumes. They decide to disguise themselves by cross-dressing so they can find out what the popular kids really think about them. The already awkward heroine dresses up as a thug from the Bronx and the geeky boy puts on a secondhand prom dress and a blonde wig to disguise himself as a new German foreign-exchange student. In their clever costumes, the geeks quickly learn the true reason why they were invited to the party. But before they can head out the door, they find themselves in a strange predicament! Will they become part of the "in" crowd? Do they even want to? This fast-paced farce is full of one-liners that will leave your audience in stitches.

A: I think what inspired me to write this play is the fact that many of us have felt the same way as Alexandra and Sam. I have found myself at parties in college, and even as an adult, where I feel out of place. When I attended UCLA, my best friend went to USC, and he would invite me to theatre parties. I was majoring in English and dramatic writing so hanging out with a bunch of actors was very strange. Writers and actors are different animals. Writers observe and kind of stay to themselves while actors are always competing for the spotlight. I felt very out of place at some of these functions and could sympathize with Alexandra and Sam. Also, I know what it's like to get picked on in high school and come to that sudden realization one day that there is nothing wrong with you. It's those who are picking on you who probably have problems.

A: My favorite line in the play is when Alex pretends that she moved to the new school because she killed a guy in Reno "Just to watch him die." I like this joke because I admire Johnny Cash and because it's an example of how family-friendly plays can include jokes that the kids won't necessarily get, but the adults will enjoy. This line got a huge reaction on opening night, and between scenes, we played the song "Folsom Prison Blues," and 300 people clapped along.

A: I wrote my first play as a freshman in high school, a show about the duality of war called "Atheists in a Foxhole." It dealt with the 10 Commandments versus the 10 amendments during a time of war with four characters lost in the jungles of a fictional country called "Kilgore." I worked on the show for the next seven years and eventually had it fully funded and produced by the University of Southern California's theatre department.

A: I've always liked writing. I can remember writing a short sequel to "Star Wars" in the first grade. I think the biggest reason that I got into writing plays was because I would read a great book by someone like Kurt Vonnegut or see a great film, and I would want to create something like it. I used to write fairly depressing dramas as I went through my teenage angst years, but now I primarily write farces. I love working with characters who have no idea what's really going on while the audience is in on the gag. Some of my biggest influences are Steve Martin in the farces "Three Amigos" and "Dirty Rotten Scoundrels" as well as Mel Brooks' films "Blazing Saddles" and "Young Frankenstein."

A: The fact that I can make other people laugh with my work. I love finishing a script and passing it off to some of my students or to my friends and having them tell me how they were giggling throughout the read. When I was in high school, I remember watching a writer at the academy awards receive the lifetime achievement award for his work in musicals such as "Top Hat." In his speech, he said that he always loved writing musicals because there is already so much pain and suffering in the world. If someone is going to pay money to come see a movie, he wants to make them feel good. That really struck me as something important, and since then, my main focus has been on writing family comedies that cannot only make kids laugh but also are enjoyable for adults.

A: Finding time. I've never had a problem writing plays. I wrote "Shalloween" in one sitting. In about four hours, I had the play written, and it hasn't changed all that much since the first draft. I usually write about 30 pages in a session, but unfortunately I don't always have time when I want to write. I am only 24 and already I am a full-time English and drama teacher at a high school outside of Yosemite, California. When school is over, I run a production class from 4 to 6:30 p.m. four days a week. We usually put on four to five plays a year, including some very difficult pieces like Tennessee Williams' "A Streetcar Named Desire," so by the time I get home, I have put in a 12-hour day. Many times, I have to make time to write, and so if an idea hits me, like "Shalloween" did, I will simply stay up until 2 a.m. writing it, get up at 7, and start all over again.

A: Audience. Audience. Audience. If you want to write a play for yourself, then that's something else altogether, but if you want to get it produced, you have to think about those people who will pay to come and see it. I've had many students and friends share work with me and get offended when I constructively criticize it. They will go on for 20 minutes explaining to me why something is funny or why the characters would act this way. I tell them that if it takes them twenty minutes to explain to me why they wrote what they did, then their audience is not going to appreciate it. As a writer, you must get feedback. You don't have to accept all of it, but if you hear from five different people that your ending is confusing, then you have to fix it because the audience will be confused too.

A: Most of my main characters are a lot like me, a little clueless and awkward. The love interests are often based on girls I've known, and my villains usually represent the types of attitudes I dislike, specifically selfish and cocky personalities. I wouldn't say they are people I know but more of a blending of people I've met over the years.

A: I try to create something clever and truly funny. If I can make an audience laugh, then for the most part, my job is done. I think it is harder to write comedy than it is to write drama, and I enjoy that challenge. I wouldn't say that I'm all that funny to talk to, but when I put characters into situations, many times the results are hilarious. One of my summer shows actually ran 20 minutes long because there was so much laughter. When I have people come up to me with a grin on their face and quote a play they only saw once two years ago, then I know I've achieved my goal.

Q: WHAT ARE YOUR FAVORITE HOBBIES? WHAT DO YOU DO IN YOUR SPARE TIME?

A: Well, as I've said, I don't have much spare time. When I do find a moment, I write. I love cooking, going to plays, and watching DVDs with my best friend Noel. I am currently planning a theatre-based trip to London with some of my students and hope to travel to Europe at least once every other year. Traveling is a real passion of mine, and the big plan is to spend a year in Scotland getting my master's in playwriting.