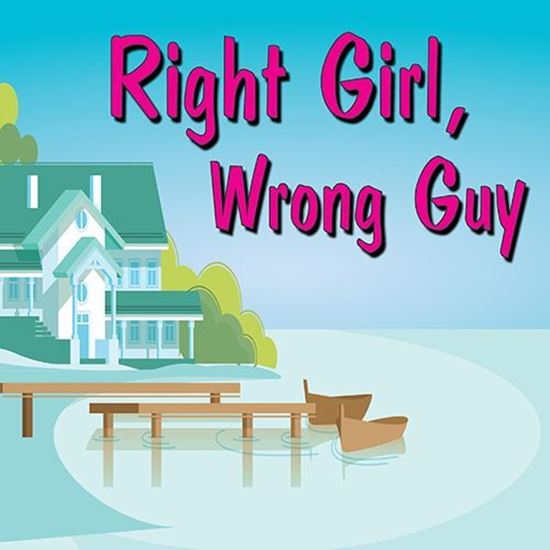 The wealthy Grayson clan has gathered for daughter Juliet’s wedding shower. Her brother, Jefferson, has brought along his new girlfriend, but Jefferson’s former girlfriend and Juliet’s former boyfriend both show up as well. Awkward! Things really heat up, however, when older brother, Jesse, falls for his brother’s new girlfriend. When Juliet’s fiancé has his secrets revealed, the wedding falls apart, and tears and accusations ensue… but in the end, the women come to realize that happiness is not that far away. They were simply with the wrong guy.

This show came from the title.  I was playing around with Right and Wrong and this title occurred.   I fell in love with it and decided this needed a show to go with it.  As I started bouncing around ideas, it started as two roommates who were in love with the same girl.   When they became brothers, the Grayson family was born.  I really liked their various personalities and had a great time telling their story.  In fact, I keep thinking that there might be a sequel in the future.  I think most of that comes from the fact that I really like the Graysons and would love to know what happens to them next.

What's your favorite part or line in the play?

I love the section where Jefferson and Hope are having it out over Jesse.   Jefferson explains about the canoe test and Hope goes on and on about failing the test.  Finally, she says that she would have let Jesse give her mouth to mouth if it would have made him hate her.  Jefferson looks at her and says, “He did give you mouth to mouth!”   That whole section is so much fun because it was totally unplanned.   It comes directly out of the situation and is all very natural and not forced at all.   And that’s when comedy is the sweetest!

The characters are not based on anyone I know.   The canoe test, however, is based on an actual test that my father has always promoted.   He has always said that if you put a couple in a canoe together and they can spend the day without killing each other, then the relationship has a really good chance of making it.   That obviously became Jesse’s test.

Plays need conflict, of course, but I love shows where there aren’t any real villains.  Just good people who make mistakes and get confused and forget to listen to each other.  I really like the fact that Jefferson is the one that puts everything to right at the end, even though he has been the main stumbling block for Jesse and Hope.  I like that Hope doesn’t believe in love at first sight, but it happens anyway, and I love the way the family rallies around each other at the end.  They may not understand each other or agree with each other, but they love and support each other.  If we could all treat the people around us like that, maybe we could all have the happy ending that the Graysons get.

Hope has to be believable as a free spirit.  The original Hope was very energetic and fun with a real joy for life and it made it easy to see why Jesse would fall for her so quickly.   The entire Grayson family has great affection for each other and that must be obvious even when they battle.  My Jesse and Juliet had been acting with each other for years…their ability to achieve sibling annoyance and affection at the same time made their scenes delightful.  Finally, the original Caroline was a queen.  She moved through the chaos with nobility and calm that only cracked in a couple of comic places.  If a director is lucky enough to have an actress who can do that, it really helps make the family feel like the upper-class people that they’re supposed to be.   (Not to mention how it allows her to have a strong contrast to Jesse’s down to earth ways.  What fun!)