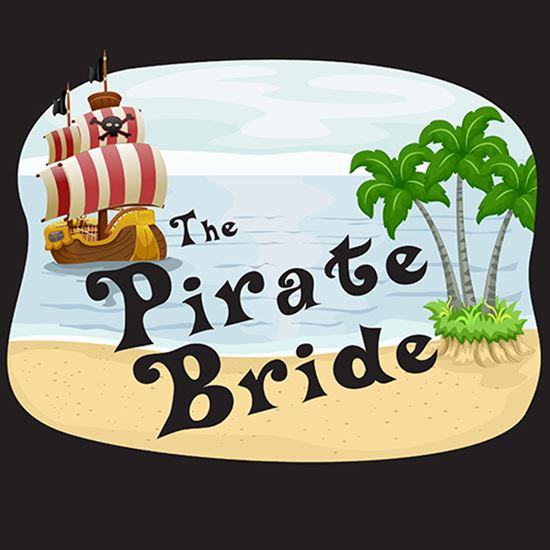 While evading her wedding and overbearing fiancé, Lizette de Champlay, a headstrong French woman, leads her ladies to a British merchant ship. Once aboard, the ladies upset the sailors and their disciplined captain, Roger Thornwood, convincing him to hunt for treasure on an island home to a fierce band of female pirates. As Roger and Lizette begin to fall for each other, Lizette’s fiancé and her father follow them to the island, only to be captured by the pirates. What follows are battles of the heart and sword as everyone searches for their treasure.

TALKS ABOUT HER PLAY THE PIRATE BRIDE

A: I was really inspired by the happy endings and witty banter between couples in Shakespearian comedies. I've always enjoyed a good pirate adventure too. The original idea came to me in a flash. I saw this headstrong heroine and discovered her journey. I love to write strong and spunky female main characters in part because of the stories that shaped my love of the written word. While writing the play, I also thought about the kind of characters I'd like to be or see on stage.

A: I enjoy the pace and back and forth action of Act 1 Scene 1. It was the first thing I wrote even before I outlined the rest of the play. It wasn't until we performed the show that I realized how strong a character Roger had become. It's as much his story as Lizette's. My friend Jason brought him to life so vibrantly that he became a perfect foil for Lizette. I also have a warm, fuzzy spot for the coconut fight. It was a fun scene both to write and watch on stage. I couldn't stop laughing every night as I watched the scene. It never got old, and the faces my friend Matt, who played Bertrand made just killed it. I love the delicious chaos of the finale too. It was my husband's idea to introduce Blackbeard and I thought the character added comedy yet also held a certain gravitas that anchored the scene. He got to play the part so that was icing on the cake. And all of Lizette's sword fights. I did the Shakespeare thing and just said "they fight" so each director could create the scene as they saw fit, but for me, it was always an epic battle, and I loved getting to learn real fight choreography for the show. That fight between Roger and Lizette in Act 1 Scene 3 was a happy moment for me. They say the pen is mightier, but man, it's fun to swing a sword around.

A: Only one character was directly based on someone. I based Peppy on this terrific young actor. I always pictured him being there with a quip and a fiery shock of red hair. I think the characters all have bits of other literary counterparts. There is a touch of Beatrice and Benedict (from Shakespeare's “Much Ado”) in the antagonistic relationship of Lizette and Roger. I can't pretend I wasn't influenced by some of my favorite sassy heroines like Elizabeth Swan, Jo March, and Princess Leia. But as I wrote, each character became their own entity.

A: I wanted to create opportunities for more female actors since so much of theater is dominated by male-heavy plays and nine times out of ten there are more women trying out for parts. I wanted to turn the tables on pirates and sword fighting so the damsels get themselves in and out of distress-sometimes with the help of a dashing hero but often of their own accord. I also loved the idea of a female pirate captain who was ruthless but smooth too. I feel very strongly about writing shows that are family-friendly so that everyone can be involved in the theater experience and kids can enjoy theater from a young age. It can be hard to find shows that fit this description.

A: My husband was a huge help and inspiration when crafting this story. I can't thank him enough for endless edits, conversations, and car-trip chats about the story of the play. I am also so grateful to the original cast and crew of the show. They breathed life into my story and created real characters from words on a page. Metro, my church, was also instrumental in providing the performance space and covering production costs. I'm grateful for their support of our theater ministry.