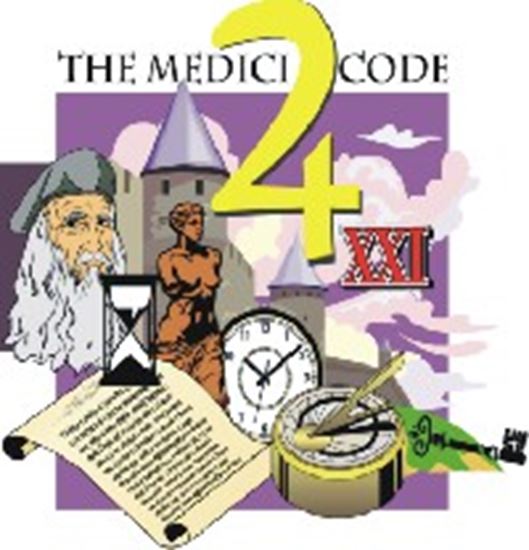 When a mysterious old woman named Q slips tickets for a trip to Medici Castle to Lucy Lyons, she feels compelled to go there. Lucy, a classical scholar and cryptologist who is temporarily caring for her nieces and nephew, Emmy, Jess, and Ben, is intrigued by the remote, historical hotel. But the tour group they are with is strange, and soon one of the tourists suddenly disappears. His wife, however, seems more interested in getting a missing parchment back than finding her husband. Q appears and tells Lucy she needs to crack the Medici Code, a dangerous, long-lost secret dealing with time travel, before anyone else does -- just so it can be destroyed. When her nieces are kidnapped, Lucy is forced to work fast. With the help of Ben working on her laptop, and the discovery of a clue in the castle, Lucy forces a killer's hand and brings all the hidden identities of the tourists into the open.

A: I was inspired by novels such as "The DaVinci Code," "The Bourne Identity," "Raiders of the Lost Ark"--stories in which the main character is searching for what Alfred Hitchcock called the "McGuffin"--the object that spurs the story on such as the Maltese Falcon. Even though the object itself might not have any real world value, the characters all desperately want it and will do anything to get it. In "The Medici Code," I hoped to build suspense by not letting the audience know what the McGuffin is until the very end, thus keeping them guessing.

A: I have a couple of favorite moments in "The Medici Code." I enjoy it when Carrie and Daisy bring in Mr. Tweedle's luggage and he falls exhausted into the chair. It's a very character-defining moment for them and him. I also like the phone call at the end of Act I when Lucy finds out the girls have been kidnapped. It's a strong and suspenseful carry-over through intermission. The stakes have now been raised for Lucy.

A: The characters really didn't come from anyone I know. The closest to real people would be the kids because they are probably subconscious combinations of kids I've known. Paddy and Bridget are also quite real in the sense that they interact like a daughter and father who love and depend on one another no matter what. The rest of the characters are funny, over-the-top nuts.

Q: WHAT DO YOU TRY TO ACHIEVE WITH THIS PLAY?

A: Most importantly, I tried to create a play that is an adventure. That's hard to do on stage because of the logistical limitations. However, I've tried to incorporate enough action so that audiences won't get bored for a moment. I also wanted the adventure to be fun and funny, but also dangerous enough so that the characters seem to be in real jeopardy. That's why we don't get to know the murder victims very well (we wouldn't want to care too much for them) and why they're both shady characters to begin with. I finally wanted to create characters actors would have fun playing. Each one, I hope, is different and challenging and almost all of them get to wear a mask during most of the show which they take off at the end, becoming a totally different kind of person.