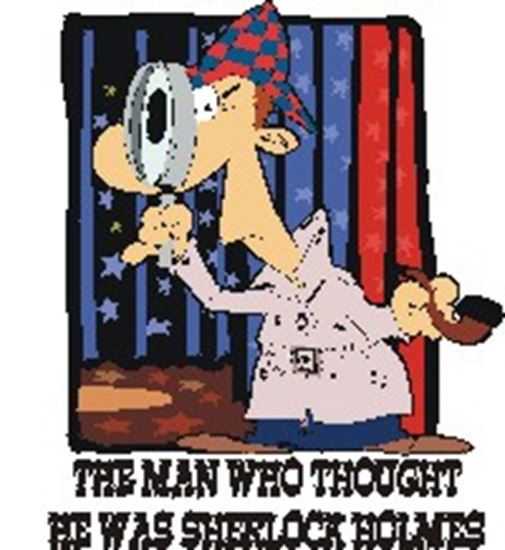 Dinner theater can mean death to an actor's career, or occasionally, an actor. That's what the cast of "Weekend at Withingham's" finds out when the lead of their dreadfully bad dinner theater production dies right before his entrance. But who can help? They would need a great detective. Unfortunately, what they get is a man that is so psychiatrically challenged that he thinks he's Sherlock Holmes and his psychiatrist is Doctor Watson. An audience-participation play full of dual characters, quick repartee and just a touch of deduction, "The Man Who Thought He Was Sherlock Holmes" has played to laughter-filled, sold-out houses across the USA. One flexible role even allows for a local celebrity to have a cameo.

"THE MAN WHO THOUGHT HE WAS SHERLOCK HOLMES"

A: I wanted to write something that I would enjoy performing as an actor. I had always loved Sherlock Holmes and wanted to come up with a way to bring him to the modern day. I had been doing a lot of bad dinner theater at the time, so putting those ideas together seemed perfect. Then I decided to write multiple endings so that people could come back and never know who the killer was night to night.

A: Obviously Sherlock, although I like Dr. Watson/Goldstein as well.

A: I like when Holmes comes back at the end. I think the audience definitely wants him to solve the crime.

A: I was trying to write a valid mystery without giving up an inch in the amount of laughs the script would generate. So, I had to make sure that every clue was valid for all the endings.

A: I think the important thing is that every actor in this show plays two very different characters, and that's an opportunity that you don't get in many scripts.