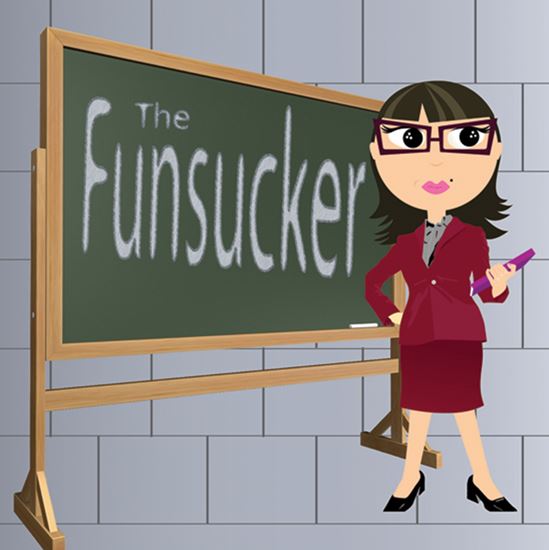 Fed up with the unruliness of his school, hard-nosed Principal Wolfenstein hires Janitor Patton and his top-notch cleaning crew to fix the problem. But it’s not enough against Bobby Franko, leader of the pranksters for all of his six years of high school, and his mafia-like group of friends. When the war reaches new heights, Wolfenstein calls for the return of someone so horribly cruel and void of any joy that she was previously banned from ever setting foot in the school again --The Funsucker! She literally sucks the fun out of every student she encounters, bringing stability but at a great price. Before our noble yet meek hero, John Trueheart, and the love of his life, Jane Flowers, can save the day, they have to first bridge the gap between their respective social circles and then unite janitors and pranksters alike, all the while surviving the mean-spirited Kimmy and her friends. Finally they transform the Funsucker and restore the life back to their high school.

A: I really enjoyed acting in one-act plays in high school, but I had been frustrated with plays where only a few parts were really fun to play with the rest of the cast assuming mostly filler roles. So I tried to write a play where everyone cast would have something special about their role that made it enjoyable, even the narrator. Secondly, I wanted to include some good messages, such as the importance of treating others with respect and kindness and standing up for yourself and others against the typical social pressures of high school – without the play taking itself too seriously. It seemed to me that many plays were either completely silly with virtually no point, or too serious to enjoy playing the roles. I did not think a play had to choose between meaningless goofiness and unentertaining seriousness – there was a “meaningful goofiness” out there. I was going to find it.

A: My favorite line is Kimmy’s “brilliant” observation in the middle of her lecture to the good-natured Jane regarding valuing outward appearances over inner character: “And it’s what’s on the outside of you that people see, Jane, not the inside.” This was an ironic twist of what everyone always says is most important. As silly and ignorant as Kimmy sounds in this speech, I believe that many students in high school – and adults for that matter – act according to Kimmy’s logic. As much lip service as we would like to pay to the value of inner character, it seems that Kimmy’s sense of value all too often carries the day.

Q. ARE THE CHARACTERS BASED ON PEOPLE YOU KNOW?

A: I thought it would be fun to pull various types of stock characters – the mafia boss, the army sergeant, the crazy scientist, the strange mystic, etc. – and throw them into high school roles. I identified with John, the main character – a nice guy who just did not quite fit into the popular crowd – and had always hoped there was a girl like Jane out there who had the ability to fit in but could resist the temptation to let that ability affect her character. (Thankfully, I think I have finally found that girl in my soon-to-be wife.) The idea of The Funsucker herself was more tied to the message of the play. On a basic level, I thought it would be funny for characters to have their personalities “sucked” out of them. On another hand, I tried to have her character demonstrate the difficulty of trying to find a balance between having fun and being hurtful. You cannot make high school so rigid and controlled that students cannot have fun – it sucks the life out of kids – but having too much freedom allows students to seriously hurt others. There’s a balance out there – and school officials and students have to find it.

Q:. DO YOU HAVE ANYTHING ELSE YOU'D LIKE TO ADD?

A: The creation of this play was really a family event. I originally wrote it for my sister’s high school class to perform under my mother’s direction. And my dad’s contribution was one of the best lines: “Hey, it’s not my fault that my ears happen to have 20/20 hearing.”