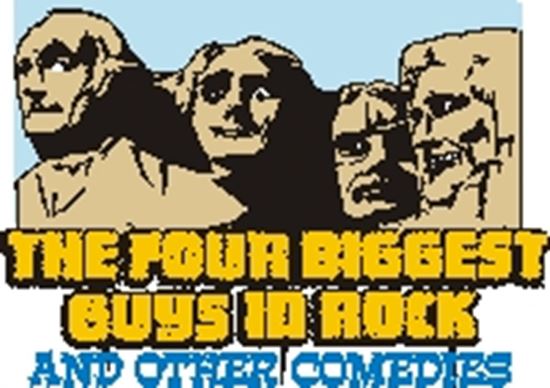 Their adoring public never suspects these four great men in rock are bored senseless and challenge each other with daily mind games. And with these famous guys, anything goes, from historical trivia to famous quotes. This ten-minute play is just one of 10 in this collection which is sure to entertain with its quick dialogue and quirky situations. In other plays a man tries to prepare for the worst with a visit to his friendly, neighborhood survivalist warehouse; several soon-to-be driving teens meet their match with their instructor; a teen job seeker shows she's got what it takes to be the next entrepreneur of the year; the aged Sherlock Holmes proves he is as sharp and clever as ever; the bidding war is fast and furious as the contenders are desperate for this job; and a fresh recruit is ready to serve her country but with a shovel? Perform these plays as an evening of theatre or individually.

"THE FOUR BIGGEST GUYS IN ROCK - AND OTHER COMEDIES"

Q: WHAT INSPIRED YOU TO WRITE THIS COMPILATION?

A: I worked with the editors at Eldridge to put together a cohesive collection out of existing scripts and new material. We agreed that we wanted to target the collection towards younger actors, and that opened up a whole new bunch of ideas that I probably wouldn't have thought of myself. Each play had its own inspiration, but my favorite is "The Four Biggest Guys in Rock." I had written another script which my wife didn't like, so I ran back to my office and 45 minutes later had written a play that I think is one of my best. It was the inspiration for the title of the collection.

A: I really like the ending of "Grandpa's Rewind." It comes out of nowhere and really says quite a bit in very few words.

A: There are so many favorites throughout the 10 plays, but I'm very fond of Kim in "Drive-Thru Interview." She's never thrown by the situation she's in and she's so darn smart. I do take names from people I know and integrate them into my shows. There's nothing like seeing your mother's face when she hears a character with her maiden name beating the tar out of a 400 lb. gangster offstage.

Q: WHAT DID YOU TRY TO ACHIEVE WITH THIS COLLECTION?

A: I think the main goal was to entertain, but also to enable young actors an opportunity to play fun characters that are facing real problems, but handling them in a fun way. I like to write comedies with heart. A friend of mine once said that after he sees one of my shows he's reminded that there are good people in the world. I really like that.

A: Comedy is about timing and precision. If you have both, the laughs will follow.