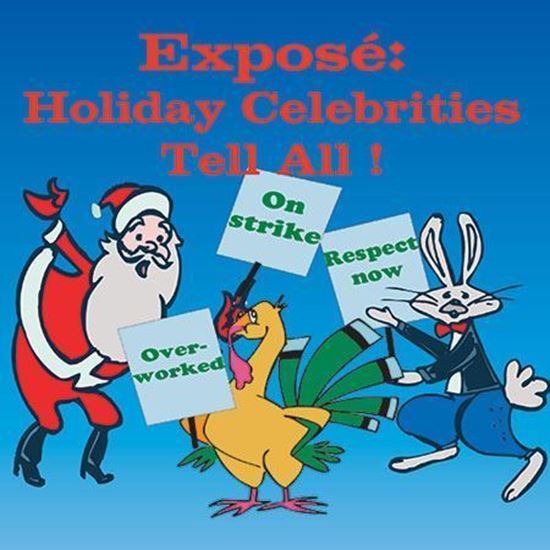 Every month many look to their calendars and start counting down the days until the next holiday. But what about those who are working behind the scenes to make these holidays great? What about the everyday problems of Cupid, leprechauns, and the New Year's Baby? Do we ever stop to think about their needs? Their wants? No! And that's why they're on strike. Journey through the bizarre, strange, and riotously funny underbelly of the holiday world as the icons we all know and love go on strike in this comedy. See what happens when hunters try to shoot down Rudolph, the Thanksgiving Turkey joins overeaters anonymous, and the Tooth Fairy goes to the dentist. And don't forget the lesser-known holidays like Bad Poetry Day and Stupid Question Day. They need recognition too, and if they don't get it, we may never see another three-day weekend again!

A: This all started as a short scene I wrote about Santa Claus flying over the Carolinas and Rudolph getting shot down by some hunters. I called it "Rudolph, the Red-Nosed Reindeer: Open Season" and when I showed it to a few of my students who encouraged me to write more. Eventually I found a holiday icon for every month of the year and the comic situations I could put them in were endless. It's like thinking about a cat stealing a car or kitchen appliances rebelling against their owners; it's strangely funny and fascinating to think about these non-human entities taking on human emotions, wants, and needs.

A: My favorite part is in the Santa scene when the two backwoods yokels are trying to figure out why there are presents scattered everywhere after they shot down Rudolph. They still don't know that they've shot down Santa's sleigh..."a supernatural flying piñata." I think I love this part because three of my high school actors put on this scene at lunch just before Christmas and this line got a HUGE laugh.

A: Well, the basic holiday icons were easy enough. The hard part was when I decided to have twelve holiday creatures, one for every month. I did some research and found that there is an official holiday for every day of the year and so that's where I found Bad Poetry Day and Stupid Question Day. Admittedly, a lot of my characters are based on my students. The Gothic girl that Cupid runs in to when he tries speed dating is a hybrid of a few of my Goth students. The bald eagle is based on a good friend of mine who refuses to admit that yes, he is going bald. The PETA protestors are really making fun of me and my girlfriend Noel (we're both tree huggers and proud of it).

A: Usually I write about real people or teenagers in real situations (usually embarrassing and farcical ones) but with my last Eldridge play, "With Regard to Cooper Clawson's Conscience," I forgot all about reality and allowed my characters to wander through space and time. This may seem like cheating, but it also made for some very funny moments. I decided to try writing a play completely based on fictional characters that we all knew when we were innocent children but now have to re-evaluate as adults. There are a lot of people that I knew as a child and now know as an adult (like.my parents) and how I view them has completely changed. I had that sudden epiphany one day when I realized that my parents were human beings and they too could make mistakes. It seems like a real duh-duh concept now, but at the time (I was 19) it was revolutionary. So I took that same concept and applied it to the myths of my childhood. What would Santa, the Easter Bunny, the Tooth Fairy, and Cupid be like if I met them in a bar? This play answers that pressing question.

A: I'm known for rambling so I think I've covered it all. However, as far as costumes go, don't freak out. The sets for this play are very minimal but the costumes may seem elaborate and expensive. If your actors are believable and make the characters their own, the costumes shouldn't be a big concern.