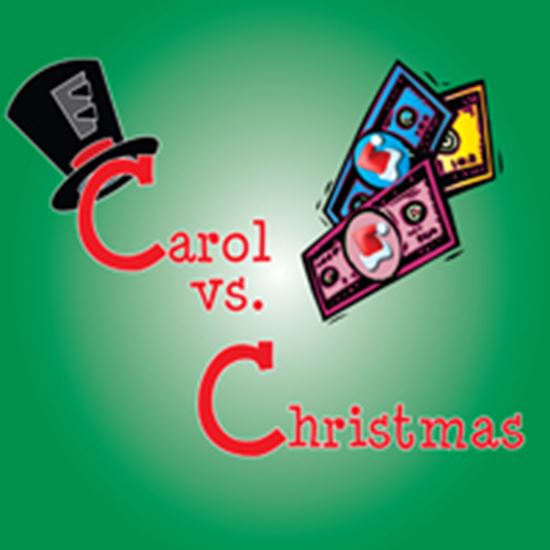 Book By: Lisa Nanni-Messegee and Todd Messegee
Play #: 8410
Pages: 48 pgs
Cast: Flexible from 16 to 33+ including some speaking roles for children

In this modern reimagining of Dickens’ "A Christmas Carol," a struggling theatre company is rehearsing a Christmas show. Carol, the hard-driving real estate agent who owns the building, interrupts, demanding rent. Later, in the empty theatre, deceased business partner Marlene appears to Carol, foretelling that three spirits will appear. Throughout first two, a sage child who speaks in Victorian slang and a gregarious game show host who forces Carol to play along, Carol still remains unmoved. It isn’t until she is visited by the Ghost of Christmas Future that Carol is rocked to her core, stunned when the only people who come to the morgue to sign paperwork are a few members of the small theatre company she kicked out of her building. Bitttersweet comfort comes to Carol when Future is revealed as the deceased spirit of her own father. She wakes up, back in the theatre where some of the young cast members offer her Monopoly money to pay back the rent. Carol lovingly accepts the payment and joins them in a final Christmas song. About 80 minutes. Incorporates several Christmas carols. Originally produced at TheSPACE in Fairfax, Virginia.

Talk About CAROL VS. CHRISTMAS

TODD: Some producer friends of ours work at a network in Los Angeles. We originally pitched Carol vs. Christmas as a made-for-TV movie. They passed on the idea but instead of shelving it, Lisa said it would make a great play.

LISA: A few months later, the Artistic Director of the theatre company I work for, Acting for Young People, asked for a Christmas play. Carol was the perfect fit. Since Todd and I wrote the movie pitch together, we decided to write the play version together too.

LISA: Our reimagining of the Ghost of Christmas Future is high on my list. In the scene, Carol is holding the doll from her childhood. She turns and the Ghost drops his hood to reveal himself as her deceased father. In a heart-breaking moment, she says, “Daddy?” and crosses to embrace him. The Ghost has a very neutral response to the hug, whereas it’s transformative for Carol. I cried my eyes out the night I wrote that scene. I had to pull myself together to show it to Todd. We usually read our dialogue out loud back and forth to get a feel for it. With that scene, I handed Todd my pages and said, “You’re going to have to read this on your own because I can’t get through it.” The same thing happened when I directed the premiere – only now I wasn’t alone. Everyone around me had tears in their eyes. When we premiered the play, 200 people had the same reaction. It was a powerful moment.

Q: TELL US MORE ABOUT THE CHARACTERS.

LISA: The signature characters in the Dickens book are in "Carol vs. Christmas." We just gave them a new spin. We liked making the classic Scrooge character a female and the Ghost of Christmas Past into a child who speaks Victorian slang.

TODD: We also wanted to make some of the Ghosts more relevant to a modern audience. An example is Marley who we changed to Marlene. She was a once powerful businesswoman and is now a ghost who is weighed down by obsolete office equipment instead of chains.

TODD: As much as we love the original Dickens story, it’s really all about Scrooge. We wanted to provide more substantial roles for all the actors involved.