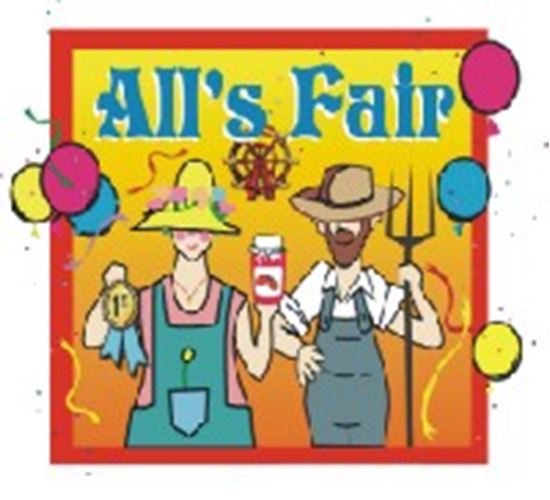 It is time again for the county fair in Flat Rock, Texas! In between the jelly judging, local politicin' and some extraordinary spoon playing, folks can see "Nature's Boo-Boos," an exhibit where teenager Tommy Rogers feels right at home, especially when he tries to do "Shakespeare in the Park"! Meanwhile, the Ladies' Auxiliary is hoping to collect funds for a hedge around the courthouse to keep all the dogs from frequenting it, while school supporters have set up a fortune-telling booth for money to get the school bus repainted yellow instead of camouflage `cause, "The bus sits there waitin' fer the kids and they can't find it!" This riotous but loving look at country life is chock-full of wisecracks, especially from the town gossips. It is also just the vehicle for multi-talented actors, who can play two, three and sometimes four characters, if desired. So kick off your shoes, pick up a cup of lemonade and join us at the fair!

A: I'm an Autumn person; that's my time of year. And invariably when I think of the Fall I think of the usual holidays and such. This time I was recalling the Texas State Fair and other smaller ones I had the pleasure of attending. That's when I began to wonder what it would be like to put a fair on stage. Then I also began to remember some of the people I grew up with. And that's how it started.

A: This is always a tough question for me. I suppose my favorite line would be the part about the school bus being painted in camouflage - "The thing jist sits there waitin' and the kids can't find it!" I believe so much of the off-the-wall and rural humor spouted from that one line -- it sort of set the tone.

A: First, to put a fair on stage, as I mentioned above. Also, to try to write a large cast show that could be played by a small cast. Also, I wanted not only to show the type of humor I grew up with but also the heart, the eccentricity, the colors, the magic and the eloquence.

A: Yes, I'm sorry I've finished this one because I had such a good time at the Noah County Fair.