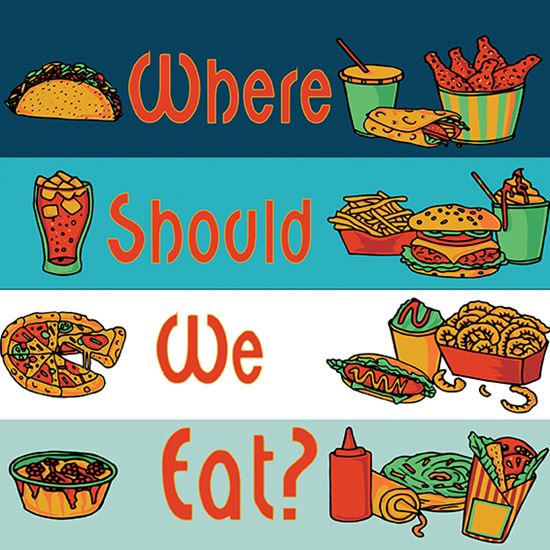 Where Should We Eat?

Every day, we make a thousand choices that might not seem important at the time, but who knows which one has the potential to change the course of our entire life? Three high school friends, Summer, Victoria and Ariel, are simply choosing a place to eat that night, but where they end up might set their futures on very different paths. Explore four possible scenarios springing from the same mundane decision in this comedy/drama about friendship, destiny, and the surprises life has to offer.

WHERE SHOULD WE EAT:

1. WHAT INSPIRED YOU TO WRITE THIS PLAY?

When big things happen in my life, whether good or bad, I often think of the series of events that caused or allowed them to happen, and I wonder if any slight variation would have changed the outcome. If I left the house a minute earlier...if I zigged instead of zagged...What if? I thought there was dramatic potential in exploring wildly different outcomes from one mundane decision, and this play was the result.

2. WHAT'S YOUR FAVORITE PART OR LINE IN THE PLAY? WHY?

Maybe it's my twisted sense of humor, but I really like what happens to Ariel at the end of Scene 4. It's such an absurd fate, and the fact that it gets undone makes the cruelty of it seem silly instead, somehow.

3. WHERE DID THE CHARACTERS COME FROM? ARE THEY BASED ON PEOPLE YOU KNOW?

They all share traits with people I know, but the closest to a real-life counterpart is Ariel. The real Ariel is a young theater friend of mine, whose voices lends itself to playfully bitter dialog. I could "hear" her voice in my head as I wrote that character. So she is meant to be an affectionate homage to the real Ariel, who is an all-around awesome person.

4. WHAT DID YOU TRY TO ACHIEVE WITH THIS PLAY?

The three H's...a mixture of heart, hope and humor, which are traits I try to include in all of my plays, if at all possible.

It was a fun challenge to write an unconventional, non-linear narrative like this, and I was pleased with the result. I hope that every cast and crew who puts on this show, and every audience who watches it, finds it enjoyable. (And thank you to the great folks at Eldridge for publishing it!)