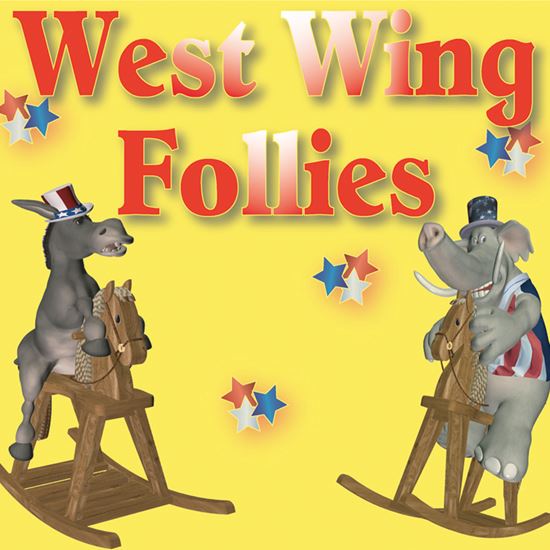 Here is a hysterical, non-partisan look at our fearless (and not so fearless) U.S. Presidents, their achievements, their failures, and their idiosyncrasies. This play offers a flexible, kazoo-playing cast the opportunity to portray history as never before! From newscasts, game shows, reality TV, talk shows, beach movies, the Grand Ol' Opry, and Shakespeare soliloquies, a cast of 12 actors presents all of the United States Presidents in twenty brief scenes. Former Presidents interview for jobs, advertise used cars, head to Fort Lauderdale for spring break, and play a game called "Gilded-Age Jeopardy." James Buchanan is interrogated by "Law and Order" type cops Woodrow Wilson sings a ballad about his attempt to start the League of Nations; and Teddy Roosevelt and William Howard Taft are elementary school students hauled into the principal's office for unruly behavior. This script is non-partisan and "G" rated. Performance time about 90 minutes.

A: My family has always loved presidential trivia. An uncle of mine, who was a physician, wrote a book in which he analyzed the physical health of each of the presidents based on what was known during their lifetimes. It's a wonderful and insightful book which explains a lot about their personalities, their physical and psychological afflictions, and describes causes and possible causes of their deaths. The book is called "The Health of the Presidents" by John Bumgarner, M.D., and is available through any book dealer. I was always intrigued by the men who found themselves sitting in that particular seat of power, particularly the ones who are relegated to the obscure corners of U.S. history: men such as Millard Fillmore, Franklin Pierce, Chester A. Arthur and Warren G. Harding. The poor guys are all but forgotten. Granted, they weren't very good leaders, but they were elected to our highest office, and are reflective of the thoughts and discernments of the people at the time. Some action each of them took, or failed to take, affects our lives today.

A. I think it's all very funny. The parodies of current popular television talk shows, game shows, and dramas are especially funny: Larry King trying to interview Franklin Pierce and Zachary Taylor, General Grant trying to play "Jeopardy" against Hayes and Garfield, Chester Arthur and Grover Cleveland heading for spring break with Benjamin Harrison and William McKinley, and a version of "Who's Line Is It, Anyway?" with Harding, Coolidge and Hoover. I love Teddy Roosevelt as a hyperactive child, and James Buchanan being interrogated by the cops from "Law and Order." My favorite may be Woodrow Wilson, one of our most educated and intellectual leaders, as a country/western singer. It's so completely out of character and off the wall.

Q: HAVE YOU EVER MET ANY OF THE PRESIDENTS PERSONALLY?

A: I have shaken hands with two of them, but we're not on a first name basis or anything.

A. I wanted to write an ensemble piece that accurately presents our executive leaders to younger audiences with a little foolishness and a lot of laughs.

A. The script is written for 12 actors, but directors should feel free to use any number of actors he or she needs. There is no political slant in this script, and it is rated "G." Forty-three of our presidents are represented. The final scene is written so additional presidents can be included, and enhancements and additions can be made.