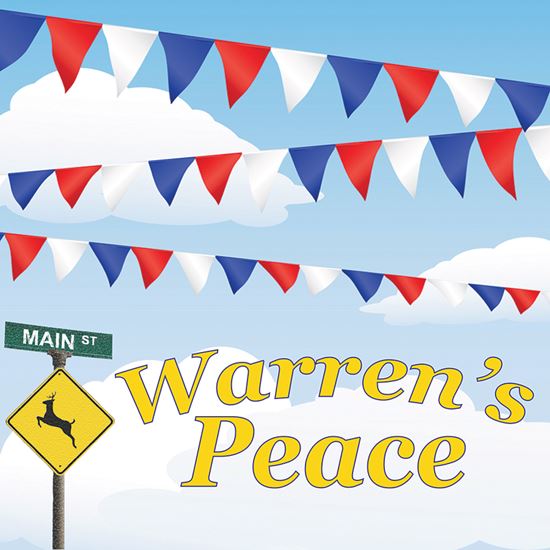 A young National Guardsman is sent to the small town of Crickwater to kick off a World Peace Day celebration, but finds the city's fathers and mothers ready for anything but peace! He quickly sees it will take more than just a banner and a sheet cake to end the conflict in this eccentric burg. The town's widowed volunteer librarian has had an adversarial relationship with her sister for so long she no longer knows how to do anything but fling sarcastic zingers at anyone who comes close to her. The mayor married the town's most eligible bachelorette, but after twenty years, signs of stress are showing, which emboldens the high school sweetheart who loved her first, and perhaps best. And what will become of the National Guardsman? He's something of a slacker, but with a good heart. If the denizens of Crickwater are going to find any peace, they better hurry up because plenty of reporters are gathering right outside city hall!

MARC: I always felt I had a “Preston Sturges play” in me. His movies, which have aged exceptionally well by the way, delight me. You knew going in that the boy would get the girl and that the bad guy would be vanquished, but it might come about in a way you didn’t expect. He had a wonderful way with absurdity, yet his characters were people just like you and me, who more than anything wanted to be loved by someone and accomplish something that mattered.

KATHY: I wasn’t inspired to write a play. I had never written anything for publication in my life. What could be more absurd than that? Having been married to a writer for over twenty years, I have acted, stage managed, voiced characters on his radio show, stitched costumes, you name it. I guess it should have been inevitable to me that eventually I would end up an ink-stained wretch, although these days, those stains come from printer cartridges and not faulty pens.

KATHY: I’m particularly proud of the business about the hometown football team, the Crickwater Crickets. What could be more antithetical than cheering your hometown boys by remaining completely silent? It’s one of those goofball things that I think theater-goers will remember long after they’ve seen the play, maybe when there’s a baby sleeping in the house. You whisper to yourself, “Go, Crickets!” and laugh at the memory of that silly play.

MARC: Warren going from slacker to sheriff is fun for me. I’m a sucker for a redemption story. I’ve seen plays in recent years where I left the auditorium feeling stressed, which is not the reason I go. When Warren’s Peace ends, you’re sure everything is going to be okay, you know? Real life is waiting at home. Let’s let those folks out there in the dark take a breather.

KATHY: Marc and I both come from small towns in Michigan, so we understand these people, the slight chip on the shoulder they have, always believing they’re being laughed at, belittled in some way. They have pre-conceived notions about people from big cities as well but, of course, those prejudices are all right.

MARC: The female lead, the voice of reason who’s a little smarter than the male lead, that’s always Kath. The mature woman with a somewhat salty, sarcastic take, that’s my mother. The rogue with the twinkle in his eye who gets his comeuppance in the end, that’s always my brother. And the doofus who’s trying to do the right thing but is unsure how to go about it? That’s me. Of course, we borrow heavily from friends and acquaintances, but the funniest thing is, when people see the plays, no one ever sees themselves as the jerk. They always see themselves as one of the good guys. And when they question me about it, I always agree with them.

MARC: Kath and I never got hung up on landmark birthdays. We’re both approaching fifty. But I thought long and hard about the meaning of those landmarks, rarely arriving at a conclusion until I was a year or two past the candle-covered cake. Turning thirty, I decided, meant you ought to know better, you should no longer be making the mistakes of a young adult or adolescent. Turning forty, I felt that a person should no longer be saying to themselves, “When I accomplish this, or get that, I can be happy.” No. You need to be happy now. A person at forty is still vital and able to do about anything outside of professional sports. You need to be happy now. I wanted to put that across, and be damn funny doing it.

KATHY: Damn funny was good with me. Wait, let me think…no, just damn funny. I like to tweak the little things and try to come at things sideways to see if the audience is on its toes.

MARC: Get the cast together for a big dinner early in the production period. Watch what happens.