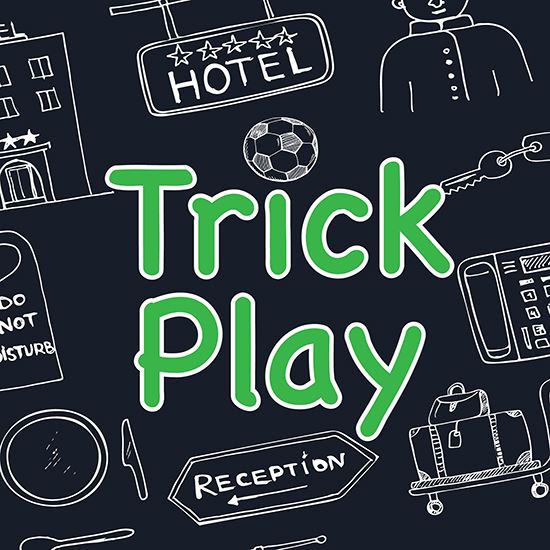 Julie, an event planner, has been tasked with organizing a soccer conference at her uncle's run-down hotel. However, no one has registered, so Julie faces being fired. Dan, who has a crush on Julie, asks his sister Effy to pretend to be a world-famous soccer player at the conference to help sell registrations and save Julie's job. Effy is a wannabe actress who looks just like the person she is asked to portray, but she knows less than nothing about soccer. As Dan tries to keep Effy's identity secret, interference from an uptight bellhop, a bitter rich lady, two tough soccer coaches, and a dead dog who keeps disappearing make things spiral out of control. The audience will have a great time watching to see if Dan and Effy can pull off this Trick Play!

A: It was a combination of things. I’ve always enjoyed farces, particularly those where characters are trying to hide something from other characters. Years ago, I directed a show where the main plot was trying to pass someone off as someone else. More recently, I had read shows where characters were trying to hide a dead body or some other object. The US Women’s National Soccer Team had just won the World Cup. So, I guess all of that just came together in my head.

A: I particularly like all of the misunderstood soccer instructions between Effy and Brian. I think those jokes are short, sweet, and to the point. They are also a nice blend of verbal and physical humor. Finally, they solidify the audience’s attachment to the characters who eventually grow attached to each other.

A: The characters basically developed as the plot developed. As a character seemed to be necessary to raise appropriate stakes or develop an appropriate relationship with an already existing character, they sort of walked in the hotel lobby in my head. While they are not based on anyone in particular, the script was not finished before we started rehearsals, and so I think the characters evolved somewhat from the actors who were portraying them.

A: I really wanted the audience to like the main characters and want to root for them as they, for good reasons, dig themselves deeper and deeper into their ludicrous situations. I also wanted to combine two plot conflicts smoothly. Lastly, I wanted to make sure that any character and relationship developments made sense.

A: I hope folks have fun producing, performing, and watching the show!