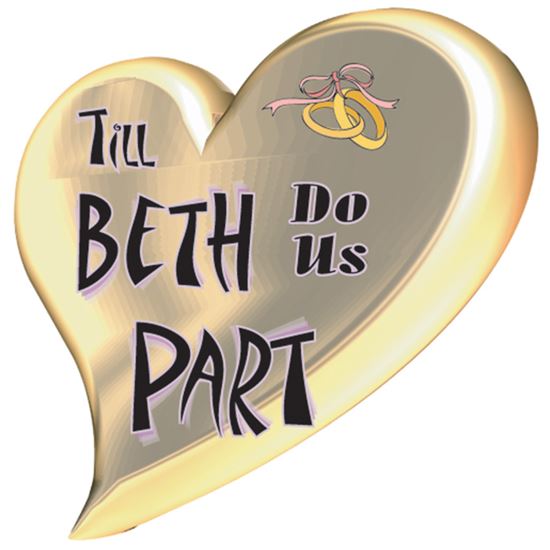 Till Beth Do Us Part

Lulu's on a quest to marry Justin by Monday to outwit her former best friend Beth who plans to marry on Tuesday. Lulu hires a novice wedding consultant, whose office is a tiny converted bathroom, and in a frantic few days they deal with a florist who goes bankrupt, a jeweler who insists that she buy the world's ugliest wedding ring, and a wedding cake with "Happy Birthday, Vern" written on it. Even all the chapels are booked, so her ceremony will take place in a bingo hall presided over by the building's janitor. Lulu declares that her bridesmaids keep her marriage plans secret-especially from Beth. But the wedding is such a deep secret that even Justin doesn't hear about it, and he fails to show up. Lulu is left at the altar with no one to marry, and with the troubling thought that Beth has outwitted her and married Justin a day earlier. Will true love win out? Like the weddings the play spoofs, it's a recipe for laughter and tears.

TALKS ABOUT "TILL BETH DO US PART"

A: I don't think of being "inspired" to write on a particular subject. I am monstrously curious and an avid reader. I had read a "chick book" about a woman who was a wedding consultant. I had no idea how much planning went into weddings or how expensive they were, or how many people it took to organize one. So I bought several bride magazines and a few books on the planning of weddings. I also interviewed a real wedding consultant, a florist, a jeweler, and a few brides. The information was so surprising and interesting and intriguing, I decided to tackle the subject in a play.

Q.: What's your favorite part or line in the play? Why?

A: The lines from the opening scene are my favorite.

LULU: I have to marry Justin on Monday.

HANNAH: But this is Friday. Why the big rush?

LULU: Because Beth is going to marry him on Tuesday.

I thought, "How exciting! Audiences will certainly wonder where I'm going with that opening." At the time, I had no idea where that would be. I asked myself, "Why would Lulu want to marry someone who was marrying someone else?" "Why would Beth want to marry the same guy?" And "Why would the guy consider marrying two women on consecutive days?" It took me about two months to come up with answers to those questions. After I solved my own puzzle, I sat down to write and spent about three months writing, editing, rewriting, and re-editing until I thought I had a good, solid play that would delight and interest audiences. Later, with some help from the editors at Eldridge, I re-wrote the play, making major improvements on it.

Q.: Where did the characters come from? Are they based on people you know?

A.: The characters are my own creations based on the needs of the story I wanted to tell. I try to be observant all the time, of course. I know it is a cliché, but according to my research, it is true that well-meaning mothers often try to take charge of the planning of their daughters' weddings, and fathers of the bride just "go along for the ride" and carry the checkbook. It is all so very fascinating!

Q.: What did you try to achieve with this play?

A.: I wanted to show a fun side of a very important ritual (the wedding) that is universal among nearly all peoples of the world. I wanted to show how those dedicated to their lovers will go through anything and fight any battle, no matter how small or big, no matter with whom, no matter how strange, humorous, or difficult in order to solemnize their union with that other person. People are funny, sometimes even in their most serious pursuits.

Q.: Do you have anything else you'd like to add?

A.: I hope audiences will enjoy the play as much as I enjoyed creating it!