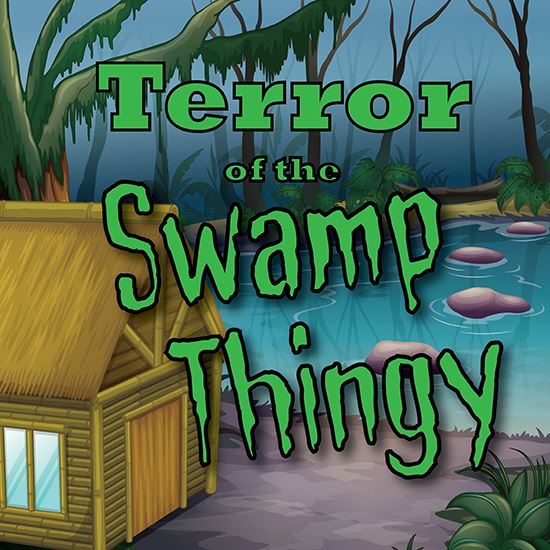 When the high school principal asks students Dani, Jenna, and Ruby to include new student Lydia in their save-the-planet activities, they’re none too pleased. Dani thinks Lydia is out to trap her boyfriend Dante, whose best friend Gavin is completely smitten with the new girl. The four girls end up trying to clean an old ranger cabin in a nearby state park. But unknown to them, a lot more guests will be secretly visiting the cabin on the same night, all with different objectives – including Dante and Gavin, cat burglar sisters Sissy and Sassy, two bewildered park rangers, Dani’s crazy Aunt Cosimia (a former alien abductee who would give anything to be abducted again), and even the dreaded Swamp Thingy, a monster rumored to live in the woods near the cabin! Confusion, deception, mystery, and laughs lurk in the woods on the night these unsuspecting people all encounter…the Terror of the Swamp Thingy!

TERROR OF THE SWAMP THINGY

Q: WHAT INSPIRED THE PLAY?

A: One evening I was browsing Netflix and came across some old science fiction movies that are really in the so-bad-they’re-good category, usually featuring some kind of ridiculous creature that is the victim of radiation or whatever. I thought it would be fun to create one of those monsters for the stage.

Q: WHAT’S YOUR FAVORITE PART IN THE PLAY?

A: I enjoy all the physical action, and it reaches its peak in the last scene when the Swamp Thingy meets the Andromian. This is my favorite part because I’m sure young actors will have the most fun acting and reacting to the situation. I also like the potato chip bag bit because it so often happens in real life.

A: I don’t really know where the characters come from. They simply develop and grow as the plot of the play begins to form. I’m sure some parts of the characters—particularly the student characters—are influenced at least in part by kids I had in class. Did I have a Dana? I’m sure I had several of them. How about a Dante? Naturally! And I did have a couple of aunts who’d give Cosimia a run for her money!

Q: WHAT DID YOU HOPE TO ACHIEVE WITH THE PLAY?

A: What I always try to achieve—a great evening’s worth of entertainment that’s full of laughs. I also tried to make this show as easy to produce as possible and yet be as much fun for the cast as well as the audience.