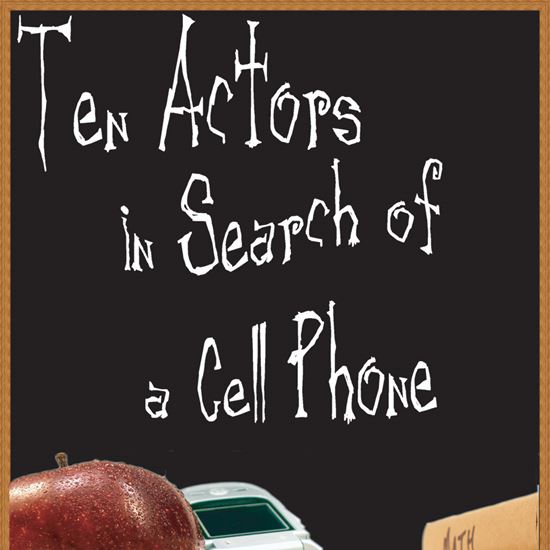 Just as the stage manager is getting ready to call "Places" for the start of the school's play, everything comes to a screeching halt. Brandy has discovered that her cell phone is missing and refuses to go on until she finds it. The other actors try to help her re-create her every move to find the exact moment the phone was misplaced, and what follows is not only the quest for a cell phone but a trip through a tangle of who said what to whom. From secret boyfriends, pet nicknames, and the confusion between Tony the boy to Toni the girl, we get a very funny look at how gossip gets started and where it goes. Does everyone learn a lesson? Heard any good gossip lately?

"Ten Actors in Search of a Cell Phone"

A: One of my students came into my room after school desperately looking for her cell phone. I don't think she ever found the phone she was looking for, but I ended up writing a play inspired by it.

Q. What's your favorite part or line in the play? Why?

A: One of my favorites is when the Stage Manager admits she has been involved in the whole gossip thing and the cast realize they don't even know her name. ("That would be me.")

My other favorite is when Kevin says, "All right, you've smashed my baby chicken - splat!" I have no idea where the "baby chicken" thing came from. It arrived as I was writing and I thought it was funny.

Q:Where did the characters come from? Are they based on people you know?

A: To some extent the characters are based on students I have worked with in school. Brandy is named after Brandy Saffell, a student who is really not like her namesake at all. The original cast had some fun trying to decide who was the basis for Kevin. I am not saying.

A: I wanted to use a farce structure, with mistaken identities and constant coming and goings, to take a look at the whole gossip thing which had been pretty rampant at our school the previous year.

A: When we took the play around to some other schools in our area, I was amazed that some of the audience members really thought that someone had lost their cell phone.