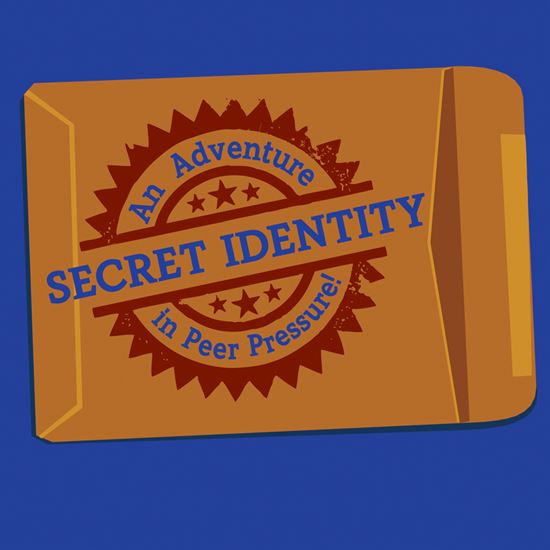 Friendship, adventure, integrity, an evil mime, a mysterious butler, stolen dinosaur bones, a man with a mailbox on his head -- it’s all just a part of the fun in this one act. Follow the heroic adventures of Princess Mystic Starfish, a charming and unconventional superheroine who battles her enemies with dogged persistence by firing bubbles in an attempt to confuse them (or possibly get soap in their eyes). Despite her unorthodox methods, the Princess’ success in apprehending wrongdoers is somehow perfect. One day she is given an invitation to join the greatest international union of superheroes in the world—but in order to prove herself to her fellow heroes, she’ll have to take a course of action that goes against everything she’s stood for as a superhero. Meanwhile, her archenemy, the nefarious Naughty Naughty Noddingshire, is on the loose…again! With super villains on one side and peer pressure on the other, the Princess may need some help from her true friends to figure out who she really wants to be. Oh, and to save the world. That, too. (Opportunities for discussing peer pressure and bullying could follow the play.) Performance Time: 35-40 minutes.

Playwright Will Ledesma Talks About

A: When I started writing this play, I was equally passionate about both the message and the story. I find that in many educational or character-building plays for elementary school audiences, one of either the story or the message ends up taking a backseat to the other. As a result, you get either a lecture on integrity loosely held together by a storyline about cowboys (though it's generic enough that you could make the play about astronauts if you just changed a few lines), OR you get a lively romp through the imagination with a cookie-cutter moral stamped onto the end with just enough glue that you can call it a drug awareness play, but not enough that it really sticks with its audience. With this play, I wanted to put together a solid story that would excite and inspire children with a valuable lesson that was an integral element of the story. I took the character of Princess Mystic Starfish from another play I had written because, not only was she one of my favorite characters, but she's also proven one of the more relatable characters I've written for children. Kids always love the Princess and want to see her succeed because she is always going for a dream in spite of what anybody else thinks, and I think kids really relate to that. With her characteristic optimism and the superhero genre, a conflict regarding self-worth and peer pressure seemed like a natural fit. I grew up a bit of an odd kid myself, and it hurts me to see the kids I work with (and yes, often my peers as well) trying to hide their own beautiful individualities because they're afraid of others' thoughts. Soon, I had a character and a conflict I believed in, and once you get to that point, the work becomes fun.

A: I don't think I have a favorite moment in this show. If there's anything that stands out to me about this script, it would be the relationships between the characters. There are some really fun moments between virtually any two characters who appear on the stage at the same time. Stiny has a bit of a rivalry with the Princess, Queen Victorious can't stand Mailman, the Princess and Mailman are constantly in awe of each other, and Wilfred just looks around at everyone else and shakes his head. You almost expect him to say, “Back in my day....” There are plenty of fun and subtle places for actors to add a lot of depth to their characters and ultimately the world of Secret Identity, and when I saw this show first in rehearsal and eventually as a cast member, those little moments are probably the ones that I found most satisfying.

A: As I mentioned before, the Princess is from a previous play I wrote, and she is based on a friend of mine. The rest of the characters are more or less original creations, though obviously Wilfred draws from Batman's famous butler and Queen Victorious is borrowing a bit of a name from England's great Queen Victoria. Stiny is an amalgam of minor cartoon characters from my younger days. Mailman came along because I once got an image in my mind of a man who wore a mailbox on his head and opened it when he wanted to talk to others. This just goes to show you, never throw an idea out. Not even the crazy ones -- especially not the crazy ones.

A: I wanted to create an experience that was highly theatrical though easily producible. I wanted to form a show that could lead to a discussion that would be a fruitful exchange of ideas from a young audience rather than a regurgitation of specific facts and "talking points" raised directly in the show. I wanted to create an experience exciting enough that children would be inspired to create their own superhero adventures on the playground or in their backyards long after the show was over. Finally, I wanted to present children a theatrical encounter so unique that they'd have to reexamine the way they think of theatre.