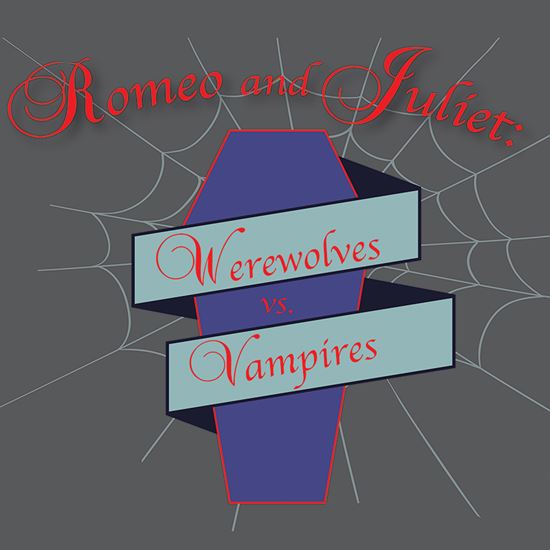 The Wolfagues, a werewolf family, and the Vampulets, a vampire family, have a long-standing feud— although no one can quite remember why. The Princess of Transylvania has ordered all fighting to stop, but that doesn’t end the battle between the vampires and werewolves. Werewolf Romeo and Vampire Juliet fall in love and quickly marry with the help of a mad scientist, but even misguided love cannot bring the two families together. In the end, we realize it’s not over until the zombies dance. Great show for Halloween or any time of the year.

“Romeo and Juliet: Werewolves vs. Vampires”

I got the job of directing the Kids Drama Camp at Triumvirate Theatre in Soldotna, Alaska and I wanted to write a script that would be fun for kids to perform but also fun for me to direct. I thought about adapting a Shakespeare play so it would be appropriate for kids, but I thought, "I don't know if kids would go for that. There needs to be something else going on to get the kids on board." The conflict between the two families in Romeo and Juliet reminded me of the fictional conflict between vampires and werewolves, and I thought, "Ah, yes. That will be fun and silly."

2. What is your favorite part or line in the play? Why?

3. What did you try to achieve with this play?

I wrote with kids in mind. I tried to write in such a way so remembering lines and cues would be easy. I wanted every role to be fun to play, to have some aspect that a kid could tap into, so that every kid would have fun. I didn't want any of the comedy to be too complex, so jokes could still play even if none of the performers had comedic timing. I wanted the set and prop requirements to be minimal. And, I wanted to stick close enough to the story of Romeo and Juliet so that if any of the kids read the actual play later, say for school, they would be able to say "I remember how this goes."

4. Do you have anything else you'd like to add?

My directing style for this play was very hands-off. Any time one of the performers asked, "Can I do this?" as long as it didn't take away from the story, my answer was always, "Yes!" The more invested the kids are in the performance, the more fun they will have.