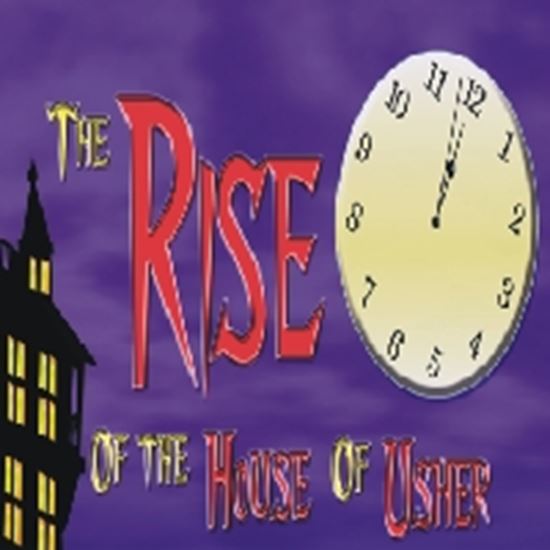 Edgar Allan Poe’s famous short story, “The Fall of the House of Usher,” gets turned upside down in this sequel ... of sorts! Far from the Gothic mood of the original story, this is a broad comedy-mystery with a little bit of the macabre thrown in for fun. Some characters from the original story, as well as a few new ones, are now trapped in a different mansion. They’ve been called together on this dark and stormy night by a mysterious host for a reading by Poe. The guests are unknown to each other, yet there must be a connection because one by one they disappear. It’s all deliciously spooky as lightning flashes, pendulums, and poisoned tea raise the play’s tension and dark humor. Actors are encouraged to break character and the fourth wall, as well as add physical bits if inspired to do so. The characters are aware that they are in a play, and can engage the audience socially when appropriate. The play premiered at the Virginia City (MT) Opera House in 2007.

“THE RISE OF THE HOUSE OF USHER”

A: I was commissioned by the Virginia City Players in Virginia City, MT., a company that does period comedies and melodramas. Because both the artistic director and I are big horror fans, she suggested I adapt an Edgar Allan Poe piece. I thought that an original play might have more longevity, and remembered that the most fun show I’d done as an actor at the company had been a period comedy. So after sitting with those two thoughts for awhile, I decided a sequel to something horrific and, at first glance, apparently without an ending that would lend itself to a sequel would be funny. Then as I wrote the script, the “breaking the fourth wall” element popped into my head. I’ve always liked messing with theatrical conventions.

A: It’s either the moment in the play where Edgar Allan Poe reads from the teeny, tiny invitation (a fun prop gag), or the moment between Edgar and Mrs. Laidlaw, “Are you predisposed to jump off a cliff, Mrs. Laidlaw?” “Of course not!” “Pity…”

Q: WHERE DO SOME OF THE CHARACTERS COME FROM?

A: They’re based on extrapolations about who the extended Usher family might be, or rather, upon who the “real” family the original “Usher” story was based. That, and I wanted to set up archetypes and then mess with the audience’s expectations of how each character would move through the plot of the play.

A: I wanted to write a horror comedy that delivered both highbrow and lowbrow laughs. It was important that the show could be enjoyed by everyone in the family. And I wanted all the roles to be meaty and fun to perform.

A: Keep an eye out for more sequels!