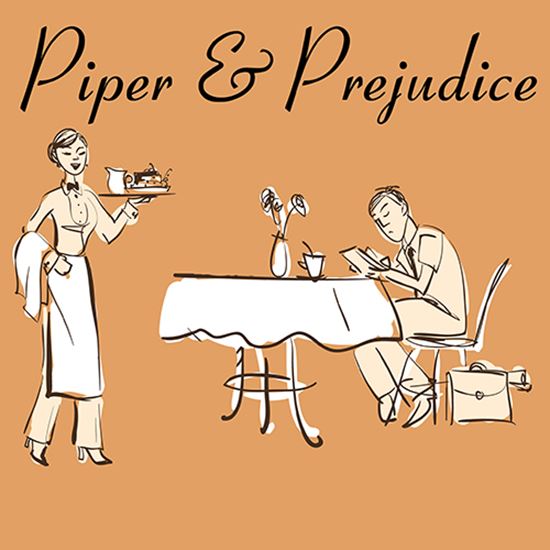 This modern retelling of the Austen classic places the entire story in an upper-class restaurant. The Bennett sisters are now four waitresses whose world is turned upside down by the arrival of the restaurant owner, a very rich but unlikeable man who seems to bring doom with him. As Piper fights for those she believes in, she comes to realize that she may have been prejudiced against the wrong characters and too proud to admit that she has misjudged nearly everyone. The modern setting allows for easy costuming and props, and focuses on the major relationship moments from the original novel.

A: While teaching "Pride & Prejudice" to students in an upper level English class, they begged me to do a stage version. They were convinced it would be great to see live, especially the intense scenes between Elizabeth and Darcy. As I thought about it, however, I realized that the book's multiple scenes, time period and subtle conversations would not be easy to stage. Once I decided to try modernizing it while keeping the major emotional moments, it all fell together rather quickly. Jane Austen's timeless characters moved into our world so easily and made the process so much fun.

A: The scene where Piper and Jude are fighting over Jane Austen is my favorite moment. I had been looking for a way to acknowledge Austen in the script, and when I decided to have Jude find the book in Piper's purse, it suddenly took off. Allowing them to start their argument over the original author instead of themselves allowed them to be more honest more quickly, and the rest of the scene unfolded in very nearly one draft. I never got tired of watching or hearing that scene.

A: Piper is Elizabeth Bennet, naturally, and Jude is Darcy. With two such classic characters, I simply tried to stay true to Austen's image. Both are very proud of themselves and their intelligence, but that nearly gets in the way of their happiness. Their scenes in the book are so passionate, and so we needed to see that they are two people who also feel very deeply. Then there is Gavin, (Officer Wickham in the novel) who is so nice to look at and to listen to, but so self-absorbed that he can love no one but himself. The clashes between these three are really the heart of the story, and so I tried very hard to allow that to come across in the script.

A: I wanted schools to have an easier script to stage while still being able to expose their audiences and performers to the fun of Jane Austen's novel. The characters are really very modern, and the idea of letting our pride or our prejudices get in the way of our own happiness is just as relevant today as it was three hundred years ago, so I really wanted to capture that in this shorter and easier telling of the story.

A: We staged the original production in a small, intimate thrust setting with only a counter and a few tables and chairs. It worked beautifully this way since it is really a character piece, and that allowed the audience to be up close and personal with these people. I believe that the simple setting and costuming requirements allows for the focus to be right where it should be, on these great characters that Jane Austen gave us.