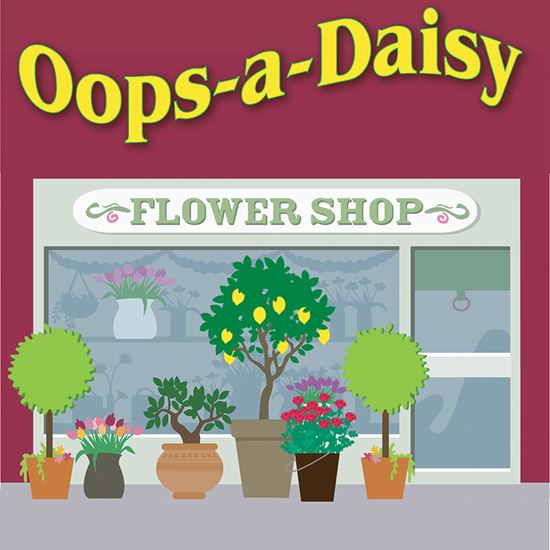 Daisy, a somewhat clumsy college student, has been hired by Rose Thornbush to sweep and clean her flower shop, Rose’s Roses. Daisy, however, only took the menial job to get closer to her real goal of floral designer. It’s frustrating because the designs Mrs. Thornbush creates are terrible, as proven by the lack of business in the shop. Daisy, along with three young customers, can design much prettier arrangements. Mr. Hoodwink and Miss Deed appear and devise a competition between Rose’s Roses and the rival Monsieur Prince’s Shop of Floral Designs. The winner is to receive a huge contract with a new hotel. Daisy, with the help of her friends, gets to do her designs, but all is not right with the contract, because Hoodwink and Deed steal all the flowers from both shops in the middle of the night. How do Daisy and her friends help Mrs. Thornbush? Well, they—oops!—we’re not giving away the ending!

A. I was in a flower shop and was impressed by all the potted plants, vases, baskets, cut flowers, and bows. It was a room filled with greenery and bright colors and wonderful scents. It occurred to me that a flower shop would make a great setting for a play. Then I considered what conflicts might arise and I was off and running. A delightful trot it was for me.

A.: The play is a comedy, and I believe there are many funny lines and characters, but the part I like best is the very last scene where Zane scratches his itching arm, and Daisy unconsciously does the same. To me, it is a nice unspoken sign that the two characters are in sympathy with each other and that a relationship between the two will probably develop.

A.: I think playwrights put their own ed traits into some of their charactersusually the heroesand fill the other people with observed characteristics of other real people. I'm afraid I am Daisy because there are times I become an absolute klutz. And Barbie is the kind of person I often associate withan outgoing, self-confident, assured personmy opposite. The other characters are like people I have observed (though I often exaggerate some traits) in malls, in grocery stores, in restaurants, in groupsany place people congregate.

A.: I wanted to show that even shy people can often work smoothly, diligently, and without distraction when they are involved in something that interests them deeply. At those times, their concentration may be so focused that the outside world disappears. Only the object at hand is seen, and self-consciousness disappears. It's freeing. And it's happiness.

A.: Writing this play was freeing. And it was happiness. I hope that readers and audiences may become focused in the same way as they experience this show.