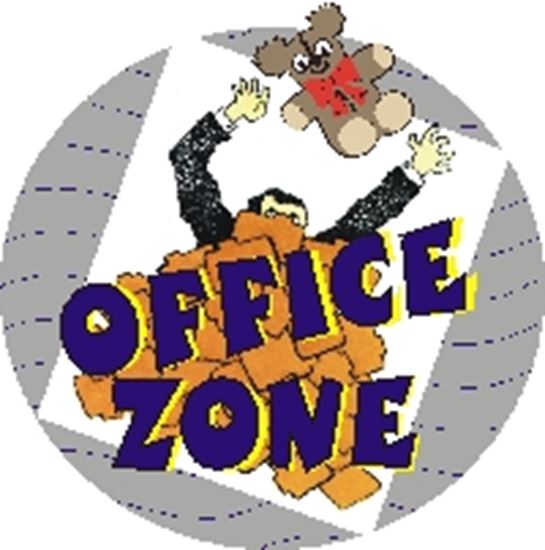 The employees of Sly-Tech Corporation are bored, uninspired, and unhappy with their jobs, which consist of generating reports no one will ever see. They don't know from one day to the next who will even own the company or if they'll have jobs. When a perky young woman fresh out of college is hired to be their manager, they are exasperated. They are even more incensed when she insists on starting off the day with team-building exercises to enhance their P.M.A. (positive mental attitude) and making them hold a teddy bear when they wish to speak at meetings. When the employees find out two custodians have been using the company computers, they begin to fantasize about corporate espionage, blackmail, and becoming rich. They begin to share their dreams and aspirations, and by the next day, they have become friends and colleagues. Their new idealistic manager, however, is beginning to show serious signs of burnout! This one act puts a fresh and funny spin on the daily grind.

A: I had recently seen Mike Judge's wonderful film "Office Space," and was reflecting on the brief time I had spent working in a corporate environment. Work consisted of generating endless flow charts, grafts and reports, attending team building and brainstorming sessions, and being consistently reminded about the importance of critical and creative thinking. For the most part, large corporate work places are great, lummoxing entities that really don't function very well. I wanted to capture some of the inefficiency and the foolishness in an entertaining venue that audiences would enjoy.

Q: WHERE DID THE CHARACTERS IN THE PLAY COME FROM? ARE THEY BASED ON PEOPLE YOU KNOW?

A: The characters are entirely made up. Most are in different stages of burning out.

A: I want to give actors a script that is hilarious to watch and great fun to perform. I also tried to make the script as accessible as possible to high school actors. Perhaps some of their parents who work in the corporate world will find something to laugh at and enjoy in this script, also.

Q: IS THERE ANYTHING ELSE YOU'D LIKE TO ADD ABOUT WRITING THIS PLAY?

A: "Office Zone" is a farce which satirizes the corporate world and the poor souls who are trapped on its lower rungs. It isn't meant to be mean-spirited, or in any way disparaging of the large percentage of our population who work in offices. Its entire purpose is to make people laugh, and maybe to offer a little encouragement. At the beginning of the script our workers are strangers, by the end they are friends. Their relationships changed when they got to know each other, and shared some of their dreams. I hope performers have as much fun bringing the play to life as I had writing it.