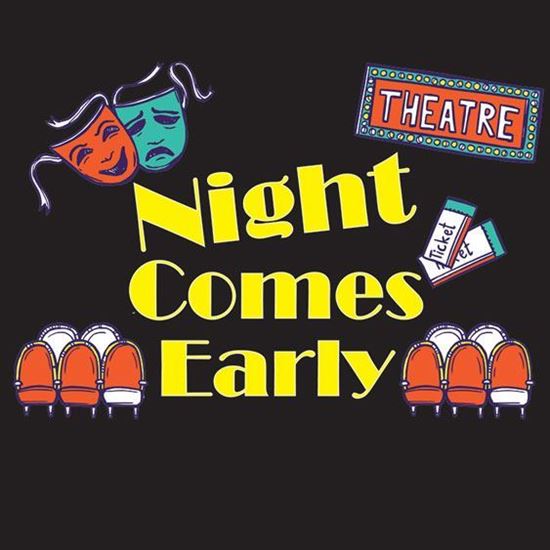 The director of the Moon Lake Community Theater, Missy Bailey, has dreamed about directing a production of a 1930s psychological melodrama called “Night Comes Early.” As a teenager she saw a professional production of the play and it had a lasting impact. Now that the opportunity has come, she encounters overwhelming obstacles: cast members who don’t know their lines, who drop out at the last minute, who have psychological issues, and workmen who can’t finish building the set. No one is ready on opening night, but the show must go on, even without enough actors to fill the roles. Actors constantly switch costumes and roles and the workmen continue to work on the set – during the performance. It’s an absolute mess, but the audience seems to be growing as the show continues, with viral videos fueling an internet sensation. Far from a melodrama, “Night Comes Early” is a fast-paced farce that shows the anxiety of a director attempting to mount a production of a play that is way beyond the capabilities of her cast and crew.

A: At some point during the preparation of a production directors ask the questions “What else can go wrong?” and “Why am I doing this?” Most of the glitches which perpetrate these questions are worked out during rehearsals, and the show goes on. In “Night Comes Early” they aren’t worked out. Actors miss rehearsals or drop out altogether, the ones that remain are not enough in number to fill out the casting requirements. They have no idea of what they’re doing and what the story is about, the set isn’t even finished and yet the show has to open. I was inspired by many productions I’ve directed, and some of the near-disasters I’ve experienced. “Night Comes Early” is a director’s anxiety dream from which the director doesn’t awaken: a production that doesn’t make it over the finish line but tries with all its might right up to the moment it falls apart.

A: Act 1 of the play is “The Rehearsals”. Act 2 is “The Performance”. Preceding Act 2 the director gives the most heart-felt, sincere, apologetic and pathetic curtain speech in the history of curtain speeches. She knows the production is going to fail, and in moment self-pity she tells patrons they might as well leave their cell phones on. This turns out to be the salvation of the show.

MISSY: Good evening. Welcome to the Moon Lake Community Theater production of “Night Comes Early”. I’m Melissa Bailey and I’m … well … the director. I’d always dreamed of directing the 1930 landmark psychological thriller, “Night Comes Early” by E.M. Williams. I thought Moon Lake was ready for something thought provoking, challenging and even a bit disturbing. I thought I would have the support of the board of directors, of the actors and of the community. But I was wrong. No one has supported me. The set isn’t finished, I don’t have enough actors to cover all of the roles and we’ve never made it to the end of the script. But I can assure you we will do our very best … right up to the moment when it completely falls apart. This is the point where I normally ask the audience to turn off all cell phones. But it doesn’t matter. Leave them on. (Chop saw is heard offstage. MISSY pauses until it stops.) Thank you. (Turns to exit and is startled to see HARRY sleeping on the sofa. She gasps, quickly exits right, returns with PETE. They whisper and hiss at each other and point. PETE drags HARRY behind the sofa out of sight. Blackout.)

A: The characters are present day actors in a community theater production of a 1930s psychological melodrama in a small Midwestern town. By the time the production opens there aren’t enough actors for the roles in the play. The actors are members of the local community: the sheriff, a school teacher, a housewife, the daughter of the director, the funeral home director. The characters in the British melodrama they’re trying to perform include an old maid, her niece, a nurse, a young man interested in the niece, a policeman, a killer, and two workmen, ex-convicts, who insert themselves into the action of the play.

A: I wanted to offer a gift to the poor directors of the world who struggle to mount ambitious productions with delusional volunteers who have no idea what they’re doing and no business being in productions.