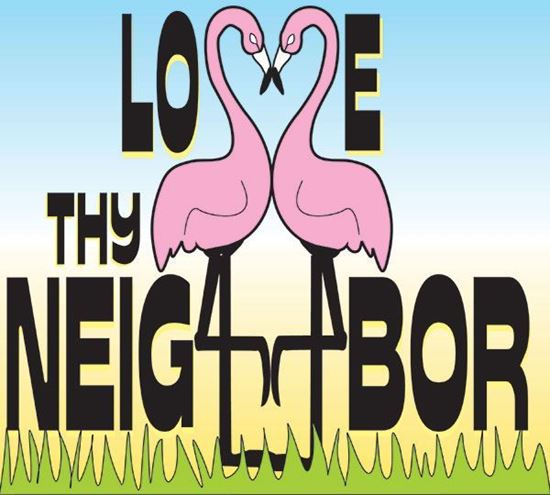 Armed with a sharply judgmental attitude and a pair of binoculars, homeowner Leona Crump is consumed with anxiety over her new neighbors. Will they be California beatniks? Or paroled drug pushers? Or more frightening yet, perhaps someone with children?! Her worst fears are realized when an odd-ball "hill-folk" family move in across the street. She quickly realizes that neither God, nor her favorite telephone psychic, has prepared her for the series of showdowns set to take place in her living room. Gafina Hambefferschmidt, an obnoxious, gum-chewing woman, together with her "Maw," an old hillbetty crone; Gafina's simple-minded, love-struck boyfriend, Turner; and her "trampy" sister Bambi turn Leona's neighborhood upside down. Threatened by the over-zealous friendliness of the women and "romanced" by the disgusting Turner, Leona vows to purge them from her cul-de-sac. But she has no support from her husband, the epitome of the couch potato, nor her other neighbor Judy, who is as sweet as pie and about as bright. Adding to Leona's exasperation are her daily dealings with her refrigerator-raiding neighbor Paul, the local real estate saleswoman, the mailman, an Avon lady, a police officer, and a paper boy...all, she is sure, who were only put on this earth to annoy her. Outnumbered, but refusing to be outmatched, Leona suits up in fatigues and resolves to "mop up" the new neighbors all on her own. Ultimately, it's a flock of pink flamingos that drives her over the edge and lands her in the local jail. But in the end, will she be victorious and drive her new neighbors away? Maybe, maybe not. It all depends on her weedeater!