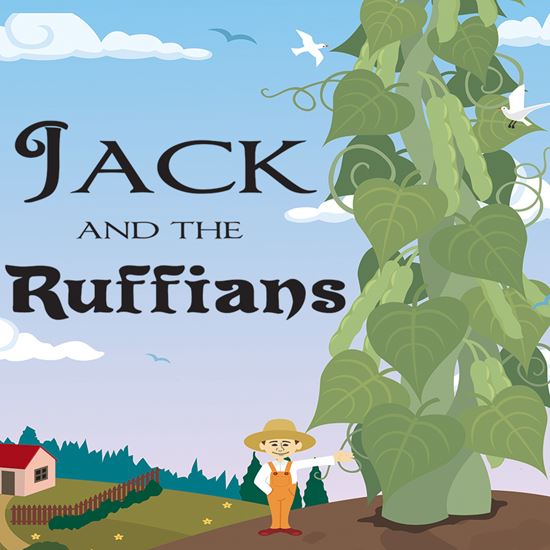 Jack's family makes and sells the best cheese and butter in the world. That is, until the competition gets jealous. Vegetable merchants Vlad (who is not-so-nice) and his sister Carol (who is missing a few cards in the deck) make a wish with some pink magic beans to ruin Jack's family's livelihood. When Jack's cows suffer strange and dramatic demises, and Jack's dad is captured by ruthless and revolting Ruffians for his cheese-making skills, Jack's mom goes on a daring adventure to rescue her husband with a ladle as her only weapon. Jack is left to do one thing: climb the giant beanstalk that mysteriously appeared overnight! When he, along with his newfound friends, Ray and Prissy, stumble upon the Giant family, they discover much more in the clouds than they ever expected — learning that sometimes the only thing that can be done during tough times is to keep friends close and keep hopes high! A slightly obnoxious and conceited Storyteller narrates this version of “Jack and the Beanstalk.” Approximately 40 minutes.

JACK AND THE RUFFIANS

A: The lines had to be simple enough to be memorized in under 2 weeks, yet the story needed the depth to be entertaining and meaningful for both the child actors and their parents. It was a tall order, so I decided to go about filling it myself.

I started with the characters. Instead of just one giant up in the clouds, it became three giants, each with a unique personality for young actors to explore. Instead of Jack climbing the beanstalk alone, he is accompanied by friends Ray and Prissy.

A: The theme is hope and friendship, which I hope is expressed well enough to be noticed, but not loudly enough to become annoying and preachy.

A: My favorite part about the script is Jack's Mom. Her determination to go out of her comfort zone and face “quicksand and desert, storms and mountains, beasts of the air and of the sea” is admirable. The whole time, “all she would think about was getting her family back together once again.” To me, she is the perfect combination of stalwart courage and elegant femininity.

A: I hope other teachers and directors may find “Jack and the Ruffians” to be simple to put on and meaningful enough to be entertaining. Break a leg!