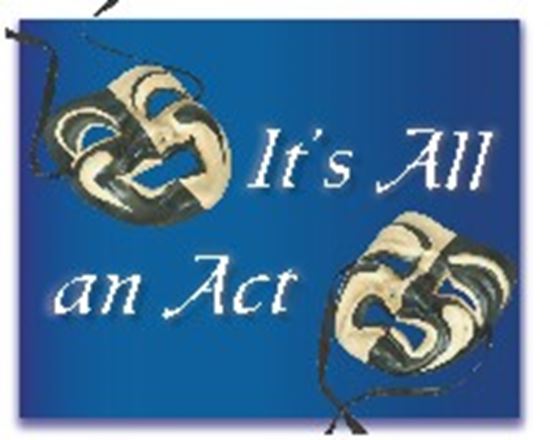 It's All an Act

Here's a delicious trio of short plays about the theatre.

In "Must the Show Go On?" (3 m, 1 w) everything goes wrong on opening night. The four actors persevere despite a drunk in the tech booth, a "costume failure," a prop gun that doesn't fire and a sneezing corpse!

In "Can't You See We're Acting?" (2 m, 3 w) three older people create havoc from their front-row seats as they unwrap pieces of hard candy, snore, and make loud comments in the midst of a dramatic play. Will the distraught actor's offer of a ticket refund help save the show?

In "Final Curtain," (3 m, 2 w) an old actor on his deathbed keeps waking and eloquently delivering lines of Shakespeare as his adult children argue in front of him. He ultimately proves, "All's well that ends well."

Q.: WHAT INSPIRED YOU TO WRITE THESE PLAYS?

A.: My experiences in theater provided the inspiration for "Must the Show Go On?" and "Can't You See We're Acting?" In a similar way, "Final Curtain" portrays an actor so devoted to the theater, no matter the effect upon his family, that he's still acting on his way out of life.

Q.: WHAT'S YOUR FAVORITE PART OR LINE IN ANY OF THEM? WHY?

A.: Richard's angry speech in "Can't You See We're Acting?" When he breaks character and addresses the disruptive audience members is one of my favorite parts, since I've wanted to make that same speech many times myself. And in "Must the Show Go On?" I'm fond of the sneezing corpse. A line in "Final Curtain" that sticks with me is "We needed more than a road company father."

A.: The characters aren't based on specific people, but rather on certain types of people I've observed, especially among actors and audience members.

Q.: WHAT DID YOU TRY TO ACHIEVE WITH THESE PLAYS?

A.: My primary goal is to entertain. "Final Curtain" mixes in a bit of a message about the importance of family relationships and how they can be damaged by misplaced priorities.

A.: These three short plays provide quite a bit of fun for the actors involved, and I hope they have the same effect on the audience.