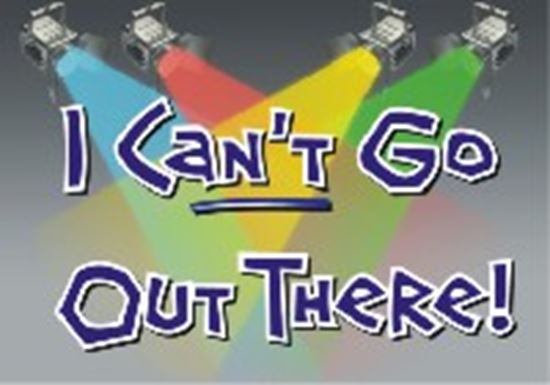 This one-act comedy in four scenes chronicles the different stages of the stage. In elementary school, a frustrated teacher deals with stage fright while trying to direct young children in a play about jackrabbits and a mean old dog. In middle school, two students who've been cast as Romeo and Juliet realize that the play is a love story, and that kissing may be involved! In high school, a teacher is holding auditions for a production of "Anne of Green Gables." Actors audition with a rather violent monologue from "Titus Andronicus," a rap version of the soliloquy from "Julius Caesar," a gothic version of Poe's "The Raven." In a community theater production the lead actor is missing and the understudy is totally unprepared for going on stage, recalling his elementary school role as a jackrabbit. Everyone --actors, wanna-be actors and audience members alike --will identify with these characters who are ready (or not!) to step out on stage.

TALKS ABOUT "I CAN'T GO OUT THERE!"

A: I wanted to write some brief scenes that show different stages of the stage. Directing a production for theater at any level can be challenging, if not terrifying. Here are four scenes: elementary school, middle school, high school, and community theater. Actors and directors deal with stage fright, fear of kissing, strange auditions, and missing cast members. It could be an anxiety dream if it wasn't so funny.

A: I love the "little jackrabbit" scene, because I actually spoke those very lines in a play when I was in the first grade. I don't remember anything else about the play, except my next door neighbor and chief rival at the time got to be the mean old dog, and I was stuck in the supporting role of a jackrabbit. I had a little stage fright when I saw the audience, and I'm sure I barely spoke above a whisper.

I love the audition scene, especially the rapper who does the soliquy from "Julius Caesar," and the girl who wants to sing "Tomorrow" from "Annie" ... even if it doesn't belong in the play.

A: The characters are all relatives of mine. Just kidding. Actually, I have no idea where they came from.

A: I want actors and directors to have an easily staged production that's lots of fun, and I want audiences to laugh till they fall out of their seats.

A: Someone once said "theater is like making sausage ... it ain't pretty, but the results can be pleasing." Actually, I think I said. it. Someone else has probably said it, too. Or something similar. This play is about what happens before the play begins: from audition to curtain. It's frightening as well as funny. In this play it's mostly funny.