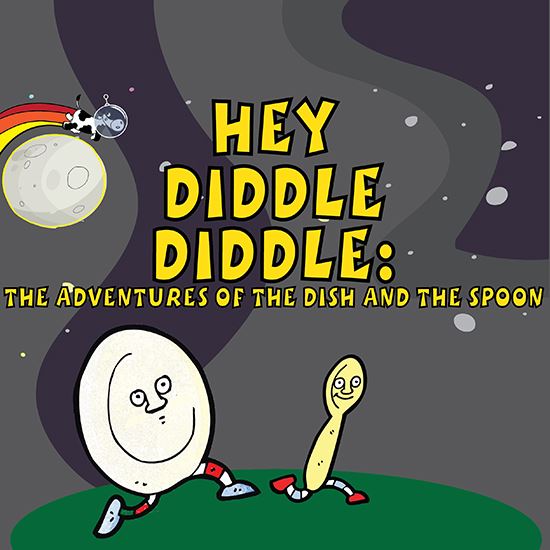 A cat plays the fiddle, the cow jumps over the moon while the little dog laughs, and the dish runs away with the spoon…but then what? A group of storytellers are challenged to continue the story of the dish and the spoon from Hey Diddle Diddle. The tales that they spin find the dish and spoon fleeing from the Abominable Snowman, encountering the witch from Hansel and Gretel, becoming spies, and even fighting bad sushi! With a gender-flexible cast of 4-23, this smart, funny and easy-to-stage show will appeal to kids, teens, and adults. About 40 minutes.

HEY DIDDLE DIDDLE: THE ADVENTURES OF THE DISH AND THE SPOON

A: A year before, I'd written and directed a show called The True Story of Hey Diddle Diddle. This new play is essentially my brain picking up where it had left off from that. However, Hey Diddle Diddle: The Adventures of the Dish and the Spoon isn't a sequel. The two plays could probably best be described as sister shows. They share some DNA…both draw inspiration from the nursery rhyme Hey Diddle Diddle, and they have similar structures…but each play stands completely on its own apart from the other.

A: I love the spy's line about hating the “inadequate station wagon” his uncle used to own...it's a fairly random and bizarre statement, yet somehow heartfelt. I also love Bad Spy trying to poison the dish and spoon by simply giving them two bottles of poison and expecting them to drink. But I think my favorite part of the play is the sushi section. I love that the Bad Sushi character has such a clear sense of identity and purpose, and I'm very fond of his over-the-top dialogue: "I am not Misunderstood Sushi! I am Bad Sushi! I inflict substantial nasal distress upon all who dare to smell me, and would bring unfathomable intestinal disaster to any who would eat me. But there is no one brave enough to eat—Bad Sushi!"

A: None of the characters are based on people I know. The dish and spoon came from the nursery rhyme. I got the idea for incorporating a Yeti after going on the "Expedition Everest" ride at Disney's Animal Kingdom. Edda was originally a guy named Bruno, but the character was so abstract that nobody understood him, and he evolved into the witch from Hansel and Gretel in revisions. The character Bad Sushi came from the idea that "bad" sushi could be evil as well as rotten, and in the same vein, Bad Spy came from the idea of a “bad” spy being incompetent rather than evil.

A: In a word, flexibility. I wrote this show to direct at my school, but I wasn't sure how many students would audition, or what their schedules might be like. I needed something that would work for a large or small cast with total gender flexibility. I also wanted something that could be broken down into manageable chunks that could be easily rearranged to give myself maximum flexibility in creating a rehearsal schedule.

A: The play’s original title was "Hey Diddle Diddle: The Further Adventures of the Dish and the Spoon," but as it moved towards publication, I decided to drop the word "further" so that hopefully it wouldn’t sound like a sequel to my previous show, "The True Story of Hey Diddle Diddle."

Of everything I’ve written to date, this is probably my most-revised play. At one point, I toyed with making the dish and spoon supporting or even peripheral characters in all of the stories. When I scrapped that idea, the play became a single narrative broken into chapters, rather than a collection of stand-alone pieces, and it was wildly experimental (and even a little bit political). There was a completely different version of the Yeti story that involved two hikers who are trying to catch a Yeti with fruit pies (a nod to Marvel Comics’ Hostess ads from my childhood) and who think the dish and spoon are aliens. (In one draft, the Yeti did not actually appear in his own scene, but did show up later on the streets of France in the spy chapter.) Edda the witch was originally a guy named Bruno. There was a scene where the dish and spoon got jobs at a giant retail store. There was a character named “Dude With a Long White Beard” who was sort of a stand-in for God. And the dish and spoon knew they were characters in a play. The drama classes at my school read the script and hated it. There was no question it wasn’t connecting with teenagers in the way that it needed to, and if it wasn’t connecting with them, then it certainly wasn’t going to connect with younger audiences. So the play underwent massive revisions two weeks before auditions (the new version got a much better response), and then got revised some more after that. Part of me still wishes I could have staged the original script, because it was just so fantastically weird, but I’m proud of the final version, and I’m very pleased that it has found a home with Eldridge.