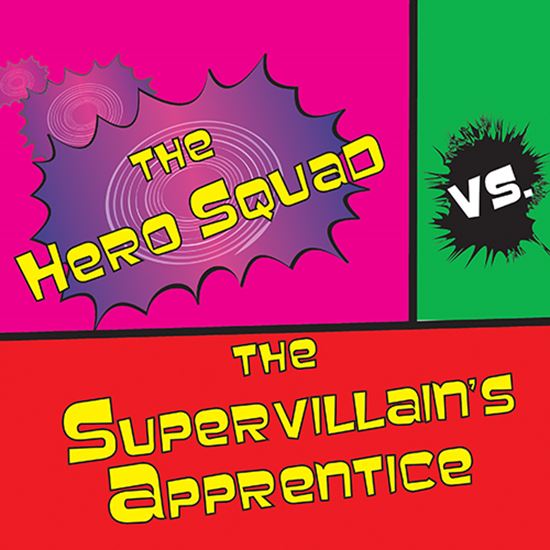 The Hero Squad of Metro Valley, Iowa—a team comprised of superheroes 3-D, Lindy, Iron Lung, and Slapshot—are enjoying a bit of a peace in their home city. All that changes when their archnemesis, the ever-scheming Nikolai Oshgoshbgoshnikov, gets a visit from his teenage niece Veronica. Veronica is a supervillain-in-training with a knack for robotic henchmen and a devious plan to destroy the Hero Squad from the inside out. Posing as a super-fan, Veronica infiltrates the Hero Squad’s HQ and begins to plant seeds of dissension among the four friends. Things come to a head when she kidnaps 3-D and decommissions the team’s automatic supercomputer, Gina Gizmo, leaving the remaining heroes bickering amongst themselves. The supervillain’s apprentice even succeeds in stealing her uncle’s latest doomsday device and kicking him out of his own evil lair! The remaining members of the Hero Squad will have to work through their differences quickly if they intend to stop the treacherous Veronica and her large, robotic teddy bear of a henchman and save their teammate before it’s too late.

WILL LEDESMA talks about THE HERO SQUAD vs. THE SUPERVILLAIN'S APPRENTICE

A: In 2005, I wrote my very first full-length play for young audiences, "The Hero Squad vs. The Princess Snatchers" (also published by Eldridge). People seemed to like it, and I had the privilege of directing the professional premiere and got to see the audiences go absolutely nuts over it first-hand. It was a wonderful experience. When I wrote Princess Snatchers, I almost immediately wrote two follow-up plays which never saw much development past a couple of readings.

In the years since, I have both written and directed many more TYA plays. I have done both originals and adaptations, fairy tales and "issues plays," classics and contemporaries, but my love for the characters of Metro Valley's Hero Squad has remained strong. There have also been elements within my earliest works that I've never been completely satisfied with. One day I was reflecting upon the two follow-up Hero Squad stories I'd written and I thought, "I bet I could make these better." I was eager to implement all that I've learned as I've grown as an artist since the Squad debuted. So I went back to the second Hero Squad script and started to find places where it could become deeper, the story tighter, the characters stronger. At that point, I decided that I HAD to revisit the Hero Squad--not only to give the world a bigger, better Hero Squad play, but because I believed I had a story and a means of telling it that would create a highly unique theatrical experience for actor, technician, and audience alike. It is, as I told the cast early in our rehearsal process, not a reflection of the world as it is, but the world as any twelve-year-old who's ever read a comic book knows it ought to be.

A: My favorite jokes are always the subtler ones. I love humor that is funny, even if it doesn't make you laugh out loud. My favorite line in the entire play is actually Lindy's "I had a dream where this happened once" in the first scene. And I really cannot tell you why, but I always found it hilarious.

As for my favorite part, I believe I am proudest of the argument and make-up scenes for the Hero Squad. Stories rise from conflict, and I think the worst of all the conflicts in the show--and there are quite a few; Veronica is an extremely divisive individual--is the one that nearly tears apart the heroes' bond of friendship. I have spent so much time with these characters over the years. I absolutely love them. And it impacted me on an emotional level writing each of those scenes. When they're played simply and with sincerity, I think they're quite powerful, and I believe they hit a nerve that all kids (really, all of us) deal with in their own day-to-day relationships. The conflict also helps keep the characters emotionally rooted in reality, which is important, I think, since it could be easy to get swept away in killer pony robots, giant cuddly henchmen, and awesome gloves and gadgets. Those two scenes are really the crux of the entire play.

A: Originally, the Hero Squad character were all loosely based on friends of mine from college. As the original play evolved, and as I've had a chance to watch multiple productions of it, and as I've grown as a storyteller, each character has really become his or her own. When I sit down to write them, I no longer see the original character "model" in my mind's eye. I just see 3-D, I see Lindy, I see Nikolai, etc.

A: All of my plays are about providing an opportunity for both artist and audience to stretch themselves. To meet in a theatrical experience that is in some way different from anything they've seen or performed before. I think it's so important to provide young audiences with surprises--and not the cheap kind where you jump out of a box and shout boo, but something they hadn't expected when the lights went down, something rich and something they could only experience at the theatre. In the same way, I want to create something that an actor, a director, a designer WANTS to be a part of. I want to create a vehicle that the artist will find unusual, challenging, and ultimately fun, because that is when I find we allow ourselves to grow and do our very best work.

A: Children deserve our very best work. Do not patronize them, do not take shortcuts for easy audience gratification, treat them (as an audience) with all manner of respect no matter what the script, because if we cheat them out of a rich, meaningful theatrical experience now, they will not care how good your Hamlet is when they are forty-something. They'll just go catch a movie instead.

Special thanks to everybody who has helped make the Metro Valley Hero Squad successful. I hope you enjoy the second adventure, and hopefully it goes over well enough that I can finish the trilogy soon!