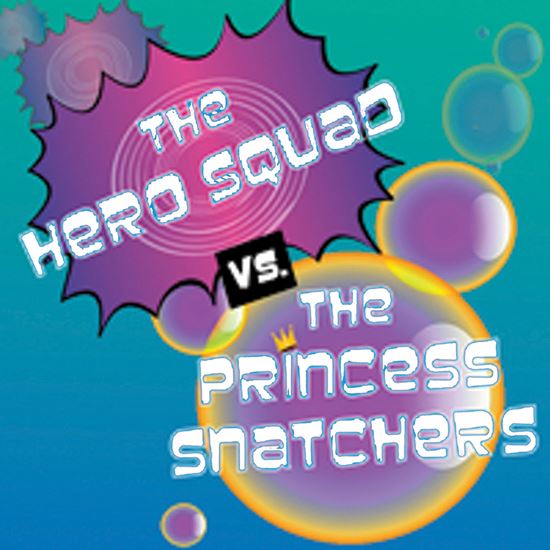 The Hero Squad vs. the Princess Snatchers

The Hero Squad literally stumbles across a plan by the nefarious criminal mastermind Nikolai Oshgoshbgoshnikov that involves a mysterious kidnapped princess. Once the princess learns the heroes' true identities, she is determined to join their cause fighting for justice. Meanwhile, Oshgoshbgoshnikov blackmails the city's established and arrogant hero, the Good Knight John-Boy, to help re-kidnap the princess and vanquish the Hero Squad. John-Boy has grown pretty tired of the four heroes stealing his spotlight. So with the help of a couple of bank-robbing bottlenose dolphins, he manages to recapture the princess. As a final clash between the heroes and the villains unfolds, everyone learns a valuable lesson in dreams, acceptance, and judging others based on appearances. It's a large-scale adventure than can be effectively presented in a small-scale theater. About 70 minutes. (Photos courtesy of Jeff McMorrough and A.D. Players.)

Playwright Will Ledesma Talks About

"The Hero Squad vs. the Princess Snatchers"

A: I recall an anecdote one of my college professors shared with me the day after he had brought his kids to see our school’s annual theatre for young audiences performance, which I happened to be in. In the play, some of the characters wielded common kitchen spoons as though they were swords. On that particular afternoon, the professor recounted to me how his two children had sat quietly and attentively as he prayed over their breakfast cereal. Then, the moment they had said their “Amen,” both children took up their spoons and cried out a catchphrase from the previous day’s show before battling one another with their spoons. It struck me as awesome that a play could stick so readily at the forefront of these children’s minds, that they not only wanted to be a part of its action and let its action become a part of their play, but that the next morning, they returned immediately to the story world.

When I sat down to write this play, I wanted to have that effect on my audiences. I wanted to create characters, a world, and a story that were so engrossing and engaging that the adventure would not end when the lights went up but would rather continue on playgrounds and backyards and bedrooms for hours and days and weeks after the play was over.

A: I’m a sucker for a big, action-packed climax. I think it’s especially rewarding in this story because everybody’s got something to learn before they can defeat the bad guy and win the day. Watching the Hero Squad overcome their own faults and problems to work as a team and beat the unbeatable GKJB is one of my favorite things in this show.

A: Almost every character in the play is based on an alternate persona I created for my friends from college. They know who they are.

A: As I stated with the first question, I wanted a play that would inspire children to go out and create their own adventures when the show was over. I also wanted to give a uniquely theatrical experience in which every actor, director, and designer could have a blast and let their imagination run wild.