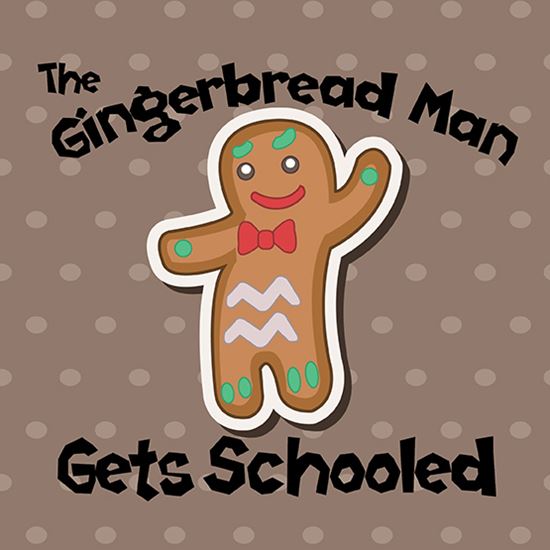 The Gingerbread Man Gets Schooled

The dashing, fleet-footed Gingerbread Man has gotten loose at Baker Street School, proud home of the Spatula Flippers. Now it’s up to a comical assortment of nerds and cheerleaders to put the bite on him. Principal Linzer Macaroon, cafeteria lady Muffin Topp and janitor Roland Butter enlist science teacher Newton Figg’s Mad Science Club and Lorna Doone’s pom squad to use their skills, talents and knowledge to capture the slick-sneakered cookie. This fast-paced show is filled with jokes, gags, slapstick humor, chases, and a riotous climax that will have audiences cheering. About 30 minutes.

A: I’ve always enjoyed the Gingerbread Man as a character. He’s straight out of a Warner Brothers cartoon: a combination of the Road Runner, Bugs Bunny, and in this version, a little bit Cupid and Shakespeare’s Puck! His irrepressible spirit, boundless joy in the chase, and delight in upsetting everyone around makes me feel happy. This is my second Gingerbread Man play. I never get tired of him, because he never winds down. He’s an eternal three-year-old.

Q: What is your favorite part of line in the play? Why?

A: I have several favorite moments and lines in this play. Although never said out loud, the character name Berner Haselnusslebkuchen makes me laugh every time I see it, because it’s a real thing (Swiss pastry). I’m sure they’re delicious, but I could never order one and keep a straight face. The key to the “nerds” is that they have over-developed intellects, but it’s wrapped up with the goal of attaining “super powers.” This combination of rational thought and comic book fantasy is funny and rings true. I also enjoy the moment when the nerds realize that Lorna, and thus all the cheerleaders, are human, just like them. Who would have thought gluten sensitivity and hives could bring about equality of the sexes? The image of the cheerleaders dropping their pom-poms and coming after the Gingerbread Man with spatulas is deliciously surreal and funny. On a serious note, the secret to understanding the play is in Muffin’s line “I put a lot of love into making that Gingerbread Man.” And earlier, when Roland says “You work miracles in the cafeteria kitchen, Miss Topp.” Love is the special ingredient that makes all the other miracles happen: the reconciliation of Newton and Lorna, the friendly affection between Roland and Muffin, the breakdown of hostility between nerds and cheerleaders, the budding crush of Berner and Little Debbie, even the thawing of Linzer.

A: I think as with most authors, all the characters represent parts of myself, and everyone else. That’s how we relate to them. The characters come alive in my imagination, but once they are on the page, the actors have to find a part of themselves in the dialogue and actions to bring the characters back to life. A hint of that actually happens in the play, when they “eat” the Gingerbread Man, only to have the principal (of all people!) bring him back. That said, given the chance, I’d love to play the Gingerbread Man (but would probably be cast as Roland).

A: I wondered what would happen if the Gingerbread Man got loose in a school, rather than on a rural road, and how his irrepressible spirit could become a catalyst for bringing together opposites (cheerleaders and nerds). I also wanted to challenge myself by working basic terms from physics, chemistry, mathematics (the antithesis of imagination and creativity in my opinion) and even names of exotic cookies and pastries into a single script! Most of all, I wanted to write a play that had non-stop action, lots of laughs and running around, and was ultimately joyful, optimistic and life-affirming.

A: The idea of spreading joy is so much a part of this script, I hope that when you produce it you will be able to make “mini-Gingerbread Men,” as described in the script, available to children in the audience. If the cast could meet the audience after the performance and distribute them, at least to the little ones, that would carry the play’s spirit into their homes. Have the cast make them, dozens of them, and be sure to put a little love into the gifts they’re creating. Who knows what miracles might happen?