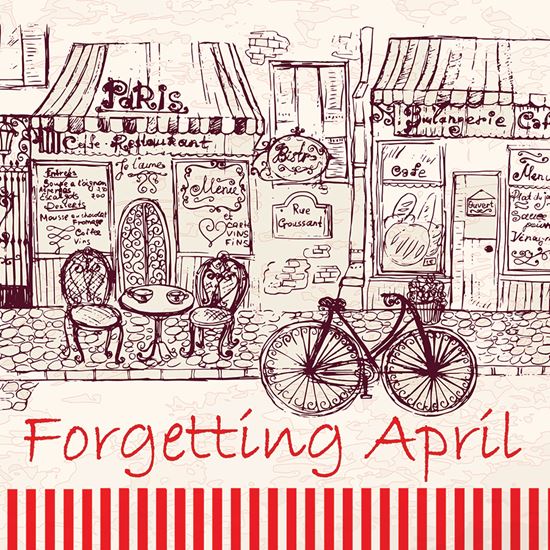 Stanley, an aspiring American writer vacationing in Paris, creates a wonderful assortment of characters to escape the recent downturn in his relationship with April. On the sidewalk of a busy café Stanley encounters several intriguing women, foreign spies, and an angry gendarme, but none can help him forget April. Even his buddy Art is of no use, running off with the April character Stanley has created. Can the real April bring Stanley back to reality? Your audiences will delight in the explosion of colorful characters and the imaginary efforts of Stanley to forget his April.

Q: .WHAT INSPIRED YOU TO WRITE THIS PLAY?

A: I am often inspired by songs, as is the case with Forgetting April. Usually on my commute or during a quiet moment I am playing music. A random song will produce vivid imagery and, being a playwright, I translate those images to scenes. With Forgetting April I was inspired by Vince Guaraldi's "Ginzu." (Guaraldi is known for his work with the Peanuts cartoons.) I envisioned a busy cafe sidewalk in Paris and the rest of the story developed from that point.

A: Being a romantic I enjoy the end of the play, where Stanley realizes that escaping to his fictional world is not solving the problems of his relationship with April and he makes the choice to be with her.

A: Stanley is a writer, in Paris, hoping the locale will inspire his writing. April, his girlfriend, has accompanied him. The audience, however, is first treated to Stanley's imagination at work while he sits at a sidewalk cafe observing and creating his newest writing. All of the characters he encounters - Russian spies, a French Jogger Girl and her moustachioed Mother, Swedish Sisters, American Ladies in Blue, and others - are inventions of Stanley's fertile imagination.

A: The hope in writing this play was to give the audience what they think is reality, but add clues throughout that all of the characters and actions are in fact part of Stanley's mind and writing.