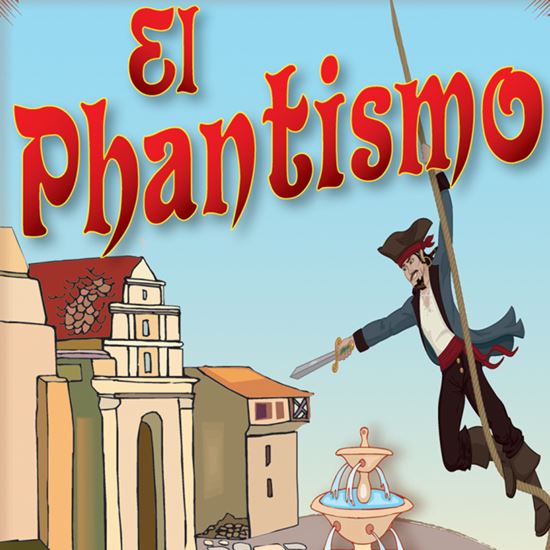 Three old crones start telling a magical pirate story to Sierra, a bored young woman who soon learns that an arranged marriage has been planned for her that very day! Feeling trapped, Sierra convinces the town loudmouth to meet her intended. Meanwhile, the young bridegroom, Santiago, plans the same ruse with his buddies. When he finally discovers it is Sierra he’s to marry, he tries to win her heart by posing as El Phantismo, the dashing, heroic pirate of the duenas’ story. Soon, Sierra’s girl friends fall for Santiago’s guy friends and weddings are planned. But more than romantic complications abound. The local mayor will do anything to claim the fortune Sierra will inherit upon her marriage and a pirate hunter wants to kill El Phantismo. Meanwhile, a real pirate is posing as the village padre, which means the young couples are not married after all! It’s pure chaos as nine different El Phantismos and assorted concerned citizens search frantically to find the real padre and capture the villains. Finally, the truth about one of the old women is revealed and there is a happy ending after all.

A.: I needed a large cast comedy for my drama students and since I was having trouble finding the show I wanted, I decided to try to write one myself. I thought it would be fun to have a boy who pretended to be a pirate and then it quickly got out of his control. It all took off from there.

A.:I love the part where Diego first puts on the pirate costume and suddenly the shy guy can talk and he just rambles on and on. The best part of it for me is that I had no idea that was going to happen. I just put him in the costume to get a mistaken identity complication and suddenly he was talking normally. I was as surprised to hear him as the girls in the play are.

A.:When I realized I needed a storyteller to plant the Phantismo story in the young man's mind, I decided to model them on the three Fates of mythology. The Duenas were born from that. The others just sprung up around the boy, Santiago. He needed a girl to impress. There was Sierra. She needed a nemesis. There was Concha, and so on.

A. All I really wanted to create was a world with lots of fun, energy and chaos. As I started writing, however, the Duenas started speaking about the power of stories and the magic of words, and suddenly it all took on another level, and became just a little more layered than simple fun and chaos.

A.:During college I had the opportunity to study with a professor who specialized in Native American literature. As I wrote this show, the Duenas and the Native American idea of stories having power emerged. That concept of being careful about telling stories because simply telling them can make them come true, came out of my memories somewhere and did a lot to shape the Duenas and the play.