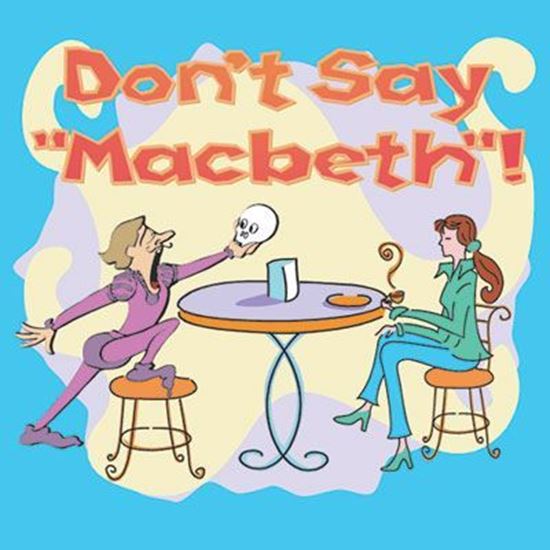 A poor student is struggling to read Shakespeare's great tragedy, "Macbeth," while in a coffee shop next door to a theater. The student gets a study boost from waitress, who was an English major, and four customers, who are actors, as they act out the Scottish tragedy in fast-paced farce. Soon, a pompous actor who has just finished a Shakespeare matinee next door, enters and tells of the "Scottish curse," and all of the unfortunate events that surround the play's past productions. Actors portray characters throughout history including Shakespeare, King James, Abraham Lincoln, Orson Welles, and Charlton Heston. Here is a wild and wacky way to enjoy both the story and the curse of the "Scottish tragedy." The script can be performed by as few as 9 actors, or as many as 40, or any number in between.

A: I was rehearsing a play with a high school age cast. Some students were complaining about having to read "Macbeth." Public schools seem to be so test oriented these days that there's little time to enjoy the subjects, especially literature. How can anyone not enjoy Shakespeare? I asked my students if they knew about the "Scottish curse," and they didn't. I researched the history of "Macbeth" and theater superstitions and turned the results into this script. A week later when I met with my young actors I gave them copies and we read it out loud. Between the gales of laughter they would ask "Is this true?"

A: I love the four actors giving the "Reader's Digest" version of "Macbeth." I love the character of Shakespeare himself expressing how much he knows King James will love the play: "It's got everything! Lust! Violence! Rock'n roll! Well ... it has lust and violence. Rock'n roll hasn't been invented yet. I'd use rock'n roll, if I knew what it was." King James' response to the play is: "I'm not really thrilled about this play. I can't say why. I just don't like it. And I don't have to like it. I'm the King." I love the theater superstitions and the curse of "Macbeth" being explored by the actors. I'm not sure why. I don't have to say why. I'm the author.

Q: WHERE DID THE CHARACTERS IN THE PLAY COME FROM? ARE THEY BASED ON PEOPLE YOU KNOW?

A: The characters came from Shakespeare, and the obscure and the not-so-obscure pages of history. I never met any of them personally. I have encountered some witches, but I don't think they were the same ones.

A: I want students to have fun with "Macbeth." It's a great story. It has a wonderful and mysterious history. I first encountered "Macbeth" in high school. It was presented in about as dry and boring a manner as imaginable. In college I took a Shakespeare course under a professor who was truly inspired and excited by his subject. What a difference. I've been reading and re-reading Shakespeare ever since. By making "Macbeth" enjoyable, relevant, and a bit off-the-wall, I hope students will have a lifelong friendship with the Bard.

Q: IS THERE ANYTHING ELSE YOU'D LIKE TO ADD ABOUT WRITING THIS PLAY?

A: This was the most fun I've ever had writing a script.