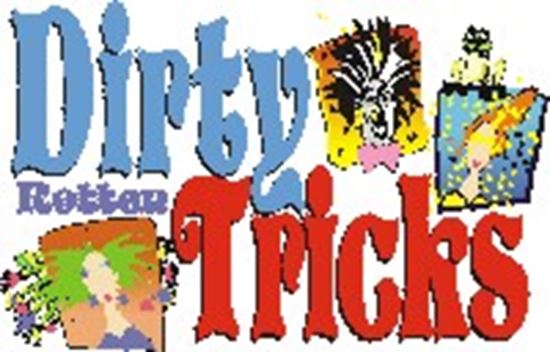 Trixie Mindstem is a bright and friendly, if not particularly attractive, senior at Noodlenick High School. Like many other girls, she has become a victim of the handsome and rich but deceitful Mark Toppledander. He steals her term papers and passes them off as his own; he invites her to his formal graduation bash but tells her to wear casual shorts and flip-flops; and he says behind her back, "Looks aren't everything, and in her case they're nothing." But he never should have crossed Trixie Mindstem because she has a few tricks of her own. While the space committee attempts to find a suitable place for the senior ball, and the decoration committee has been given the princely sum of $15.19 to adorn it, Trix and her flamboyant and bossy friend, Quits, come to their rescue by calling Mark's caterer, decorator, chiropractor, and hairdresser, and secretly having his graduation bash moved from his mansion to the school cafeteria. But their revenge isn't complete yet. The action is fast and the characters hysterical. It's a hilarious romp!

A: There is a feature in Cosmopolitan magazine (yes, I read everything!) in which women explain how they were taken advantage of by men and what they did for revenge. Readers vote on whether the response was appropriate or not. In one of the stories, a former fiancée was angered when her boyfriend later planned a wedding with another woman. She was so upset, she called the caterer, and pretending she was calling for the groom, canceled all the food. How gruesome! I decided to apply that idea to a typical teen situation.

A: I like the line at the end of Act I when the protagonist, Trix, takes it upon herself to avenge her situation and help out the school at the same time. After hearing her plan, her friend Quits says, "Trix, girlfriend, I think I smell some dirty rotten tricks coming on!" I think (okay, well, I hope) it sets up the action for Act II and tells the audience that there is some fun coming their way.

A: When I wiggled in the womb, I was probably scribbling notes for a new poem or story. My mother said I was born with a pencil in one hand and a pad in the other. I have been writing poems, short stories, and skits for as long as I can remember. Since I am a rather shy person, writing serves as a wonderful outlet for me, allowing me to express my feelings, ideas, and my creative energies. Additionally, I have always read anything and everything, and I am enormously curious. I want to know more about everything, and I want to share what I learn with others through my particular (or peculiar) perspective.

A: In middle school, we had assembly programs once a week, which all grades attended. I got involved in that, emceeing many of them, writing satirical game shows, skits, and brief plays, and occasionally playing the trumpet. I had to change schools at the high school level, but we had assembly programs there as well, so I continued speaking at them and writing shows. Also, at both schools, English assignments often included writing stories. I loved that part of school. I was particularly fortunate at both schools to have teachers who allowed my type of creativity and who gave me opportunities to express myself this way.

A: Rewriting. In a completed first draft, the plot is laid out, the characters are there, but everything is in skeletal form. Then I let the play sit for a few weeks while I think about it as I go about everyday business. I get so many ideas for strengthening and improving the story and characters that I often rush back to the computer to insert those parts. No, I never get up in the middle of the night to write, and I seldom write on weekends. I try to keep my life balanced as much as I can.

A: Completing the first draft. I keep thinking, "I must get this completely down on paper. It doesn't have to be perfect or even very good. It only has to be down on paper." I know that I can, and I will, do lots of rewriting to clean up problems, to improve the script, to make distinctive and clear characters, and to make the story believable and appealing to audiences.

A: For me, the most important thing is matching the play to a targeted audience. Audiences may be children, teens, adults, the military, seniors, those interested in musicals, revues, etc. Once the audience is selected, then the subject matter and the characters must be of interest to that group.

A: I have always been very observant. Like many writers, I like to sit back in the corner and watch peoples' personalities and interactions. I find them totally fascinating. So the characters in my plays are not based on specific people I know or knew, but on creations loosely based on people and things I've seen or heard or read about. I want to tell a specific story, so I develop the types and number of characters needed to tell that story. But I'll tell you what: there is nothing more fun or educational than sitting in a mall and watching all the people passing by! What great characters I have discovered doing just that.

A: Fun. Both serious and silly themes can be developed with a sense of humor, which, I believe, makes them more acceptable and appealing to audiences. In Dirty Rotten Tricks, Trix is duped and made fun of by the popular Mark, and she is sincerely hurt by it. Rather than accept the situation, though, she stands up for herself and proves that she is a match for anyone. Here is a serious problem faced by many. It is dealt with lightly, but audiences will understand the serious undercurrents and hopefully will find it worthy of discussion.

A: Spare time? What spare time? Although I retired as a university professor in August of 2003, I have no spare time. My life is filled with wonderful opportunities and friends and an adult lawyer-son, and reading and writing and reading and writing. Okay, so I also play violin in two volunteer orchestras; belong to three ballroom dance clubs; attend as many play productions as I can (usually one or two per week); and have a lot of fun in the biggest party town in the U.S. -- New Orleans, a mere 140 miles from here. My car knows the way by heart.