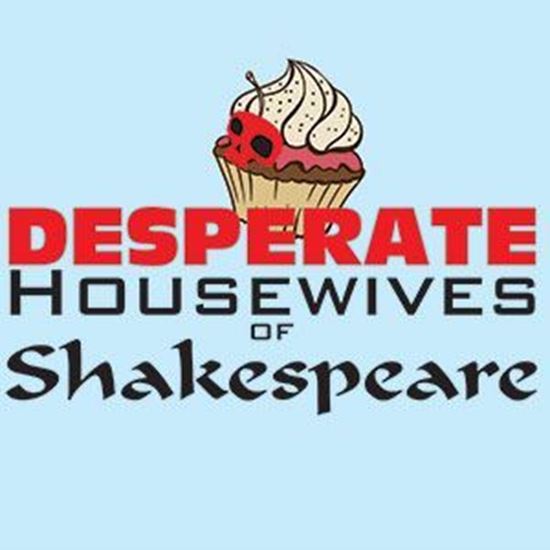 Okay, these housewives may not be real, but they are desperate. Shakespeare has been manipulating and twisting their lives for six plays now, and they desperately want to escape his evil machinations. But are they desperate enough to commit murder? Shakespeare has been found dead: stabbed, poisoned, starved, choked, bitten by an asp, and even turned into a baardvark. Lady Macbeth, Juliet, Kate, Rosalind, Cleopatra, and Titania all had the means and the motive to kill Shakespeare, but who really did it? This comic tragedy (or is that tragic comedy?) has all of the action of a Shakespearean play but with none of those angsty monologues about the meaning of life. Great for a strong female cast with some serious comedy chops!

A: Since we usually have more talented female actors audition, we really wanted a play that would let our female leads have the majority of funny lines. However, we have found that the man playing Lord Macbeth can steal the show. Also, we are huge fans of Shakespeare and parody is the funniest form of flattery.

A: I like the following lines because they sum up much of the play. Shakespeare is not very kind to his female protagonists. It is time that they got revenge.

TREMBLELANCE: Interesting. Shakespeare was injured by a wrestling hold, but that wasn’t all.

LADY MACBETH: Really? How did he die?

TREMBLELANCE: (Pulls out list and starts to read it.) He was starved, put in a sleeper hold, given hallucinogenic fairy dust, poisoned, bitten by an asp, and stabbed multiple times.

TITANIA: My, someone went to a lot of effort.

JULIET: He must be awfully hard to kill.

TREMBLELANCE: High school drama departments have been trying for centuries. It’s curious that everyone in this room has a motive for killing William Shakespeare.

TITANIA: What motive could that be?

TREMBLELANCE: Revenge! He has manipulated each of you, in turn, for his own profit and amusement.

CLEOPATRA: No one manipulates me!

Q: TELL US MORE ABOUT THE CHARACTERS.

A: Obviously, the characters are the strongest women from Shakespeare’s plays. We just made them self-aware that they were in a play and controlled by Shakespeare.

A: We mostly wanted to make people laugh. We also really do love all of Shakespeare’s plays (with the possible exception of “Troilus and Cressida.”) This is our twisted form of a tribute.

A: We think that women are very funny and this play gives them a chance to shine.