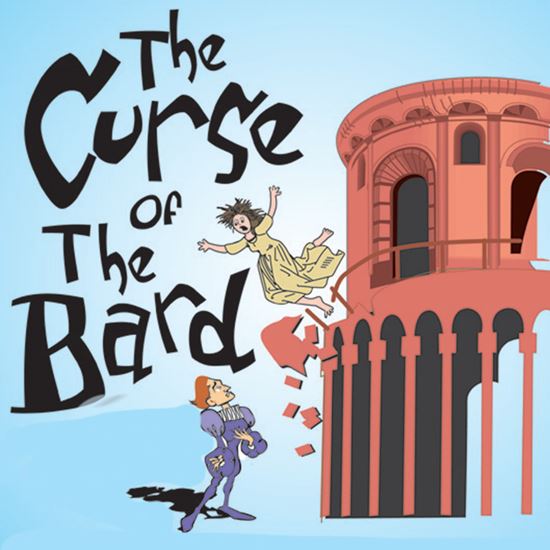 The students of Hilltop High are excited! They're going to put on a performance of "Romeo and Juliet." But the drama director, Miss Peggy Donahue, pressed into service by a principal eager to please his superintendent, is horrified. Twenty years before, when she was a student at Hilltop High, she starred in a disastrous musical version of Shakespeare's "Scottish Play," and she believes the curse lingers on. Sure enough, everything that can go wrong does. The set for the balcony scene collapses, the actress playing Juliet breaks her leg in a freak accident, her understudy develops laryngitis, and the semi-deaf costumer arrives with cowboy outfits - she thought the show was called "Rodeo and Lariat." Add a hysterical playwright, a stage mom from hell, and a mysterious cult of techies who pledge allegiance to their favorite "tool," duct tape. (Musical version available, "The Bard Is Back.")

TALKS ABOUT "THE CURSE OF THE BARD"

A: Of all the plays I have written, "The Curse of the Bard" is the closest to my actual experiences as a performing arts educator. It was fun for me to work with familiar subject matter.

A: My favorite part of is when Coach Butkus enters the stage during the performance of "Romeo and Juliet." I enjoyed writing the scene and imagining what it would be like for someone to suddenly find themselves accidentally onstage in the middle of a play. I especially like it when Patrick, as Romeo, refers to Butkus as "Coachio."

A: I started writing songs in high school, mostly to amuse my friends and myself. I began writing plays in 1991 when I was teaching at a small private school in Massachusetts. Our school had very little money and the headmaster was unwilling to provide funds for play royalties. I was encouraged to come up with something myself. So I began writing musical plays for my students.

Q: How did you get started as a playwright?

A: The school shows were well received by the families of my students. I was encouraged to take my shows out of the school and into the world. A couple of theatre groups in my community started producing my shows. I discovered that the University of New Hampshire was holding a play writing contest for children's plays. My musical, a fable, won first prize in the competition. With the prize and a few productions behind it, I looked for a publisher. With such a popular story, several publishers already had a dramatization in their catalogs. I received many rejection letters. (The kindest rejection letters I have ever received came from Eldridge Publishing.)

A: I like inventing people. Sometimes a character will be someone familiar, sometimes someone very unusual. I especially like coming up with names for them.

A: Finding new ideas is the most challenging thing for me. With so many great writers out there, sometimes all of the fantastic ideas seem to be taken. Sometimes, someone will say to me, "Why don't you write about ____?" I have taken some of those ideas and used them to fuel the creative process.

A: I try to consider the needs of the groups that would perform the play. School groups usually need lots of roles so many students can be involved. Also, oftentimes more girls than boys audition, so most of my plays have more female than male roles. I try not to have too many scene changes. Scene changes can be difficult for school theatre groups, and they can really slow down a show.

A: I have three goals with each of my plays and musicals. First, to provide a piece of theatre that is a valuable educational experience for the cast and a vehicle for the creativity of the director. Second, I want the cast to enjoy the characters they are playing and the story they are telling. Third, I think the audience should enjoy the final product, and not just because they are watching their relatives on stage.

A: "Spare" time is rare time. I spend lots of time with my children. That is time well spent and not "spare" time. When I can, I work in the yard and enjoy building stone walls and doing other landscaping. I am an enthusiastic fan of the New England Patriots and an often disappointed fan of the Boston Red Sox.