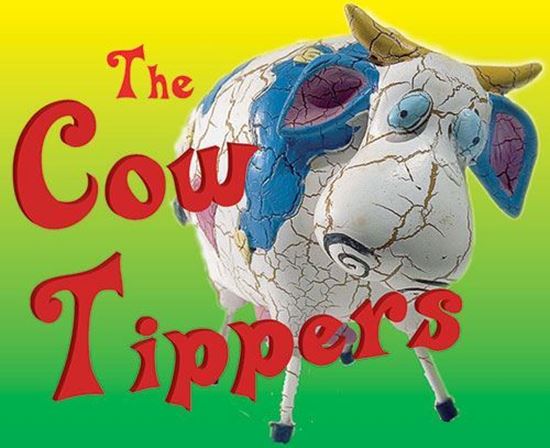 Mrs. Brown has moved to Hoke's Bluff to study rural school life. She's used to schools equipped with state-of-the-art computer labs and up-to-date technology. At Hoke's Bluff, however, high tech is an intercom system consisting of an aluminum can with a piece of string attached. On the first day of school, the sheriff shows up looking for leads to cow-tipping pranks. Her study of "these people" may be more than she bargained for. But as relationships are built, Mrs. Brown not only teaches her students a few lessons, but she learns a few of her own. And when Clyde, the school janitor, has eyes for her, she also discovers that there's more on these people's minds than just cow tipping.

TALKS ABOUT "THE COW TIPPERS"

A: My friends were claiming that cow tipping is only an urban legend and that it's physically impossible to knock over a grown cow. But then again, they're from California, so I knew there was no convincing them. I merely wrote a play about it instead. (By the way, cow tipping in not an urban legend.)

A: The scenes where Cowboy is trying his best to court Cloe. His innocence and determination make for great comedy. At the same time, most of us can identify with him having a crush on someone, yet the recipient of our attention not returning the favor. We've all been there, right? Or.is it..just me?

A: Yes they are. I have taught rural students most of my adult life because I choose to teach these kids. I grew up in a small community called Dog Town, Alabama, in the foothills of the Appalachian Mountains, so I identify with their personalities. You have to become very innovative when living so far from big cities and rural kids become creative when it comes to their recreation time. Directing rural kids in theatre productions is also fun. There is no arrogance or ego. Just kids doing their best and having a great time.

A: I live in the city now and I know about the attitudes a lot of city folks have about country living. They make their redneck jokes using their best "hick" accents. I tell them that if they had to live in the country for a year, they'd never leave. After their laughter dies down, I walk away offended. So I took a city slicker (Mrs. Brown), placed her in the middle of nowhere and she stayed. So there! Whew, I feel much better.

A: I hope when people play these characters, they don't play them as hillbillies. They're not. They are down-to-earth people with big hearts who are content with the simple lives they live. (Not that there's anything wrong with hillbillies.)