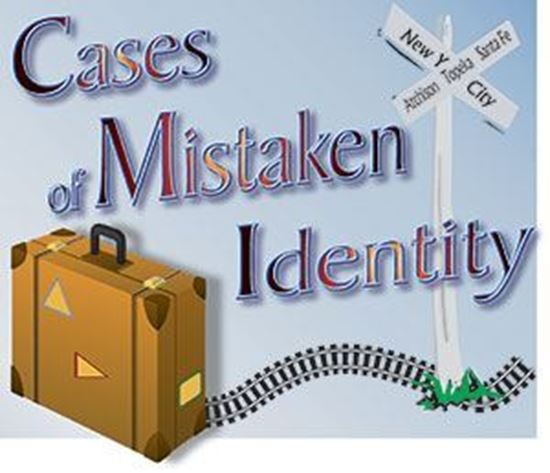 It's the late 1800s and various travelers are boarding a train for their trip West, including young lovers who are being kept apart by her parents; a secret agent in-training; an elderly woman; a group of showgirls; and a couple who have just pulled off their first jewel heist. Many of the travelers have identical suitcases which are accidentally switched. As the passengers mingle, some cases are intentionally switched, and then switched again. While the thieves frantically try to keep track of their jewels, the novice agent ends up dressed as a showgirl, thinking it's his disguise. Meanwhile, name switches convince several of the young women that they're all in love with the same fellow. By the time the train makes its first stop, the rookie porter learns that on this train, all the adventure is just a typical case of mistaken identities! Full evening.

A.: I wanted to write a comedy for my large drama group. As I tried to think of a story, I remembered that old farcical trick of the mistaken or switched luggage. So, I decided to take that to the extreme with not just two or three identical suitcases, but twelve of them. In one of my drafts there were actually sixteen cases, but that turned out to be too much and so some characters and subplots were cut to the final number of twelve. This led to the title, and so I tried putting in several kinds of mistaken identities, from wrong names, to wrong assumptions about characters, to disguises.

A.: I'm very fond of the moments where the three girls all think they're in love with Seton Oberholtzer. The motivation for Seton's two friends to use his name instead of their own is strong, and the girls' reactions are very normal, so we end up with the audience aware of the truth, but the characters completely in the dark, and that's a fun thing to be part of...if you're the audience.

A.: I rarely base characters on people I know. Usually, my characters are influenced in one of two ways. Either their name, or a need in the story line. For example, I wanted some showgirls headed west. Then, I had to figure out how to make them all separate characters so they didn't blend into each other. If they didn't have individual personalities, they would be no fun to play, so their distinctive character traits were born, chosen to make them stand out from each other. The names came from their character traits. Sometimes, though, it works in reverse and I end up with a great name that completely defines the character.

A.: I like to give my young actors a chance to play people different from themselves. High school actors don't do theatre to play high-schoolers, but because they want to be someone else for a while. So, I tried to create fun characters that would make them forget about being teenagers, such as secret agents, super villains, dance hall girls, police detectives, suffragettes and jewel thieves.

A.: I love watching a high-school cast leaving play practice exhausted from running around, fighting, and chasing each other. So, I try to create high-energy shows that utilize that boundless energy people have at that age. The show should be fast-paced, larger than life and full of that kind of electricity. Reserved emotions, intense pauses and the Stanislavsky method have little to do with "Cases." Instead, this show is all about broad farcical acting, lots of enthusiasm and physical stamina.