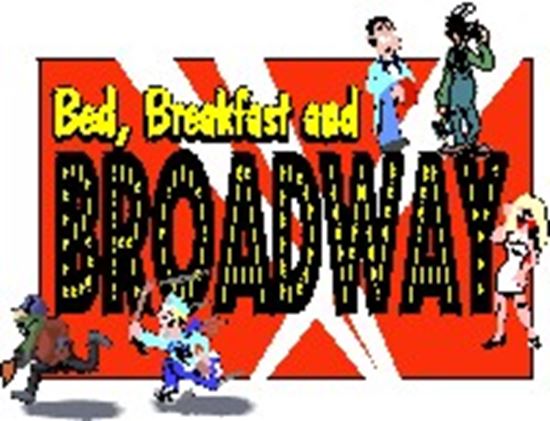 A wacky cast of actors is rehearsing for its big community theatre production of "You Only Die Twice." Marge Cunningham, the author of this "spell-binding murder mystery," runs the Enchanting Dreams Bed-and-Breakfast, which doubles as the community theatre. When she receives word that a top Broadway producer is coming to town to hopefully "discover" some fresh acting talent, she notifies the cast, and they go into high gear to perfect the show before opening night. They decide to stay in character and run their lines as much as possible before the performance. But it's not easy. Fred Atkins plays the cat burglar who can never quite make it through the window without getting his panty hose caught. And then there's Sally Hendrickson who can transform herself into a butler-chasing bimbo with lightning speed. In the meantime, a vacationing couple appears about a possible vacancy at the bed and breakfast. The local actors assume the visiting couple is the producer and his wife, but in reality the man is an overwrought air traffic controller who desperately needs a break before he has a breakdown! "Helping" the situation is the bed-and-breakfast handyman who can't keep anything straight, including important phone messages. The cast may be small-time, but they have one big dream: to go to Broadway! Let the mayhem begin!

TALK ABOUT "BED, BREAKFAST AND BROADWAY"

Reece: The inspiration for this play is based on an actual experience. My wife and I like to attend a regional theater and have become acquainted with the director. The director also owns and operates a bed and breakfast, and they would house some of the theater's actors at the bed and breakfast also. It was fun to rub elbows with them, and watch them slip in and out of character as they rehearsed their lines. I thought it would be fun if a guest at the bed and breakfast didn't know they were actors and couldn't figure out why they acted the way they did. And Arlen suggested that the actors should mistake the guest for a Broadway producer to add to the confusion.

Reece: My favorite part has to be Jack Hudson trying to impress the Broadway producer with his acting ability as the character of the burglar. Try as he might, he just couldn't get through the window without getting a hand, a foot, his head, or his panty hose caught in the window. And after all, why would a cat burglar wear a nylon stocking over his head when breaking into a house, let alone wear panty hose?

Daleske: We enjoyed most watching the parts come alive on stage and that our writing was a springboard for more creativity from the actors. My favorite parts were watching Jack Hudson use his acting genius to bring down the house with his physical ad-lib humor as he crawled through the window, and Fred taking a phone message with ketchup.

Reece: I have been writing minor things such as short stories and skits over the years, but this was my first attempt at making a serious effort at putting a play together.

Reece: Arlen and I have been involved in the local community theater for many years and have read many, many plays trying to find the right fit for our community and our theater group. Many times when reading these plays I have thought, "We could write something ourselves." When I first got the idea for the play, I just had to put it down on paper.

Daleske: Writing plays has not always been in the forefront of my mind, although entertaining people through acting has. People in our community, and especially in our local theatre group, requested, challenged or begged Denny and me to write a play that would meet the entertainment needs of our local audience. We had ideas, but finally Denny set off with the first page and a half of what was to become "Bed, Breakfast and Broadway" in the fall of 2002.

Reece: The absolute best part is seeing the play come alive. When writing it, you picture the scenes and characters in your mind. But when the actors actually say the lines you wrote and put just the right inflection on just the right word, it's magic. Your idea, your thoughts, have come to life.

Reece: The most challenging part is being able to put the ideas on paper fast enough. When the mind starts churning and the ideas start flowing, sometimes the fingers just can't type fast enough.

Daleske: Denny and I will be trying again, but as was the case the first time around, we are finding it difficult to get started. I know I have four ideas for plays, three for movie scripts, and one for a TV sitcom, but intentionally taking the time (to write) has not happened. Therefore, as with anyone who has a dream, the challenge is to get started and to write for your audience so they can wash their cares and worries away with the sweet nectar of laughter.

Reece: Know your audience. Keep the play focused. Don't ramble. I have seen too many plays that seem to go forever and go in too many directions, making it difficult for the audience to follow. You have to keep their attention. Keep it clean. There is no reason to reach into the gutter for laughs.

Reece: Absolutely. They are based on relatives, people I have met, or combinations of personalities. Sometimes, there is just no way you can make up some of these characters. They have to be real. (You just hope they don't recognize themselves, or if they do, you hope they have a good sense of humor.)

Daleske: The characters we envisioned came from the experiences of life. Mannerisms of local flavor; antics of past college clowns we witnessed; and just plain imagination in creating lovable, believable and laughable people were all involved in creating the parts.

Reece: My wife and I love spending time with our children when we can. They are all grown up and on their own. We especially love spending time with our grandson, and in a few weeks, our second grandchild! When not doing that, I like to garden. This has been the year of the tomato. I don't know what I did, but I have tomatoes like you wouldn't believe. Hmmm, maybe there's an idea for a play there somewhere.