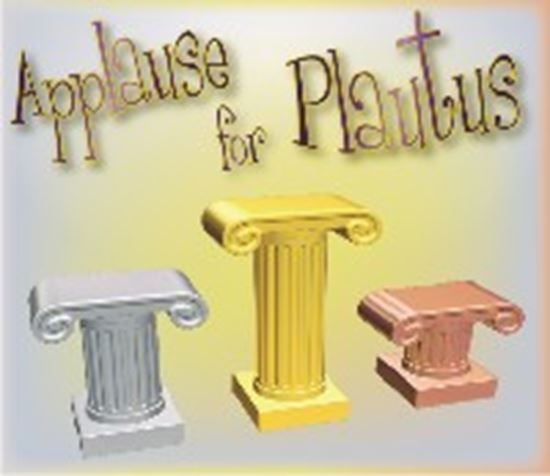 Here are three comic plays based on the work of the Roman playwright Titus Maccius Plautus. The first play is "The Pot of Gold," in which Euclio, a miser, goes to great lengths to hide a secret fortune from his family and neighbors. In "The Brothers Menaechmus," identical twins who were separated at birth cause confusion when one of them coincidentally arrives in their hometown on the day of his brother's wedding. The collection concludes with "The Haunted House" as a clever servant concocts a tale of the supernatural to aid his master in marrying a slave who is promised to an arrogant captain in the Roman army. Plans go awry, misunderstandings abound and hilarity ensues as classic plots from ancient Roman comedies are transformed to appeal to actors and audiences of today. About an hour.

A.: In my first year as drama teacher for an independent K-8 school, I was asked to direct a play for the entire 5th grade class. Wanting to tie into their curriculum, I told the teachers we would do something with Ancient Rome. I looked through many catalogues and scripts, but was unable to I find age-appropriate material that had parts for 60 kids! I decided to adapt the works of Plautus because they provided interesting plotlines and characters and gave me an opportunity to teach my students about how theatre was performed in Ancient Roman civilization.

A.: I love the over- the-top characters that are present throughout this play, one example being Euclio, the miser. He is bad-tempered and stingy, but also a loving father and a real softie in the end.

A.: Many of Plautus' plots and jokes were too bawdy for middle school students so I had to find new ways to tell the stories while preserving the spirit of the works.

A.: The play is designed for large casts, so there are fun characters and scenes throughout that provide many opportunities for young actors to shine. The structure of the play, with three separate plots, allows for flexibility in casting, rehearsals, and performance.

A.: After my first production of this play, my school awarded me a grant to study Roman theatre in Italy. Touring the ruins of the great amphitheatres and soaking up the Italian culture gave me a new appreciation for the birth of theatre in early civilizations. I hope students performing my play will gain insight into the real conditions of early Roman theatre.