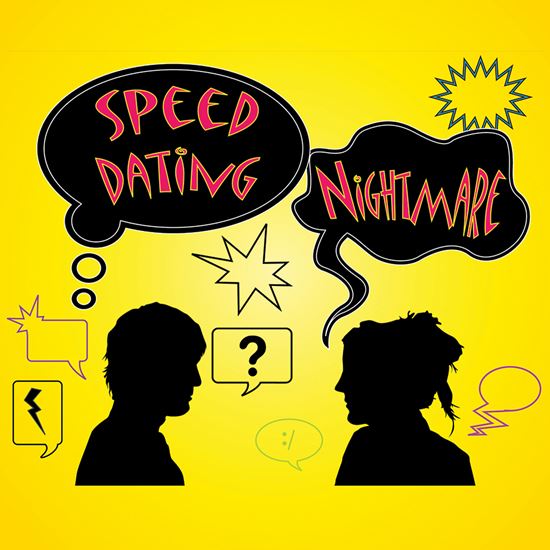 Speed dating is a great way for singles to meet other people. Each "date" only lasts a few minutes, and if it doesn't work out, you can hope the next one will be better. For Cindy, those minutes feel like an eternity as she is subjected to a seemingly endless parade of jerks and losers. First there’s Marcus, whose questions seem more like an interrogation; then Trevor, whose career motivation extends only to getting the next new video game. Third is Scissor, an artistic man with an inflated sense of ego, followed by Ernest, a socially awkward guy who thinks sharing his Tums is a nice gift. Then there's Dale, loud, rowdy and more than ready to move on to the next little filly. To make matters worse, Cindy can't help but imagine what their children would be like, as, in inset scenes, they all display the worst qualities of their fathers. Will Cindy find a good match, or resign herself to staying single forever?

One morning, my wife told me about a dream she had in which a pack of bratty, monstrous children she had never met came up to her and called her "Mommy." It immediately struck me as an idea with potential, and the kernel of the story was born. I just built up the rest of the narrative from there, and eventually, that dream became this "Nightmare."

I'm partial to the scene with Dale, who was a blast to write. I think he would be a fun role for an actor. I'd love to play him myself some day, but I'm already too darn old!

Sadly, most of the suitors WERE inspired by real people, several of whom I met in college. (And I hate to admit it, but one of them even shares a lot of common traits with ME, but I'm not saying which one.) Like it or not, these guys are out there somewhere, so beware!

The intention all along was just to create a fun story that doesn't take itself too seriously, and is enjoyable for cast, crew, and audiences alike. I also tried to make it easy to stage and ideal to take on the road, with minimal set and prop requirements.

I would just like to thank my wife for having that crazy dream in the first place, and Eldridge for believing in this script. Enjoy!