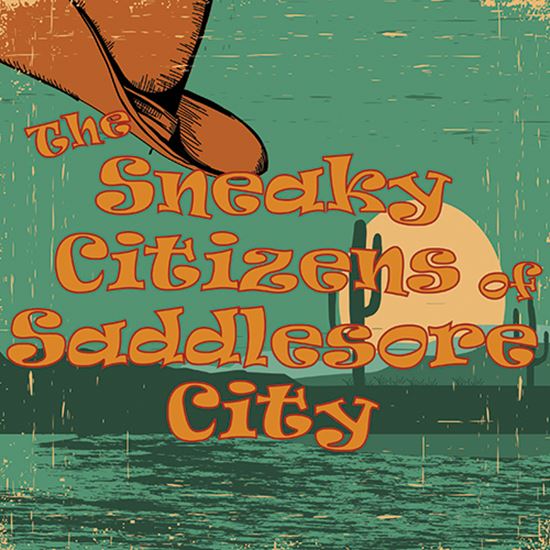 It’s the year 1890 in Saddlesore City. The Carson Hotel is a fun place to hang your hat and jist have a good ole time with friends and neighbors - playin' cards, dancin', laughin',singin', gossipin' and…drinkin' sassafras root beer by the gallons! Well, that's the way it used to be when Charles was alive but now it's just a sorry-eyed, sad-faced, ghost of a place where even the spiders are bored out of their minds! Widow Henrietta has become overwhelmed with both the duties of hotelin' and tryin' to raise Liza and Skeeter. Her once happy attitude has now turned grumpy. But then, suddenly, her prayin' and hopin' have been answered! A rich, high-fallutin' Chicago socialite lady wants to buy the hotel as she’s looking to have a nice, quiet, peaceful hotel far away from the noise of the big city. Well, the town just can't let that happen! For sure that would end any chances for getting back to the socializin' and fun times that the hotel once offered! There's only one thing to do: get sneaky and stop that outta town, nose-in-the-air, fancy, rich lady from buying the place. So, Miner Joe and Stinky Sal work up a plan, Liza and Skeeter work up a plan, Millie and the entire town work up a plan. Problem is they don't tell each other! It all turns farcical as each sneaky scheme slowly takes shape. Will their sneakiness succeed? Will Henrietta realize just how much the hotel means to the citizens of Saddlesore City? Well, as one townsperson so profoundly states, "Don't squat…with yer spurs on!" Wait, what? About 65 minutes.

JIM HAUN TALKS ABOUT THE SNEAKY CITIZENS OF SADDLESORE CITY:

One day after I finished a rehearsal for a school play that I was directing - the actors were playing around and speaking in a western, back-woods, southern slang. I thought it would be fun to write a play that offers that kind of dialect and so I chose a small turn-of-the-century western town. The whole sneaky theme just evolved from the down-home "family" feel that the characters had with each other and the need to not lose that special opportunity to gather and enjoy each others company.

Writing the scene with Millie and the townspeople was a fun, progressive process because each character just kept adding to the typical frustration that group meetings often have - from the constant digressions to endless questions to typical disagreements. It helped give each character a distinct personality and as a result, they made the scene more fun and more comical.

Fortunately, I don't know anyone I would call stinky but the innocence of Stinky Sal is definitely a trait with several friends and family members along with the joyfulness of Miner Joe and the current desperation of Henrietta.

I wanted the setting to be in a place where people had social get-togethers. I didn't want it to be in a saloon and so I chose the hotel which gave it a more "family" feel - where the townsfolk had a "home away from home." So…now they all have a personal investment in the selling of the hotel since it truly is their home away from home. All of the "innocent" sneaky scheming that takes place clearly demonstrates to Henrietta just how special her hotel is in bringing everyone together to just hang out and be there for each other.